Theoretical analysis, in general, agrees with Prud'homme's statement (1995), that one of the "costs" of federalism is the concentration of resources in a limited number of territories and the expansion of fiscal disparities among sub-national governments. The economic model of solidarity (Garcia-Milà and McGuire, 2003; Calsamiglia, Garcia-Milà and McGuire, 2004) used in this paper shows how the attainment of the goal of reducing the gaps is closely related to the degree of preference that the collectivity of the Country as a whole assigns to this goal, the fiscal system which characterizes the financial relations among the various levels of governance of the Country, as well as the means and mechanisms used to reach such results. This paper demonstrates, in particular, that, in order to eliminate or reduce the gaps in the supply of goods and services, especially in those Countries characterized by strong economic gaps, the means of "horizontal" equalization has a reduced effectiveness with respect to "vertical" equalization. In the case of Italy, the inclusion of solidarity in the function of social wealth, along with the aim of efficiency in the allocation of goods and services, would be a necessary, though not sufficient, condition, for gap reduction. Law n. 42 (2009), instead, though only with regards to the funding system of the "autonomous" functions, suggests a system of "horizontal" equalization aiming at reducing but not eliminating the gaps between the mean fiscal capacity and that of poor Regions. In the case of a Country like Italy, instead, a system of "vertical" equalization would be preferable, also in order to fund such functions, as well as a value of the index of solidarity that annuls the differentials among fiscal capacities. 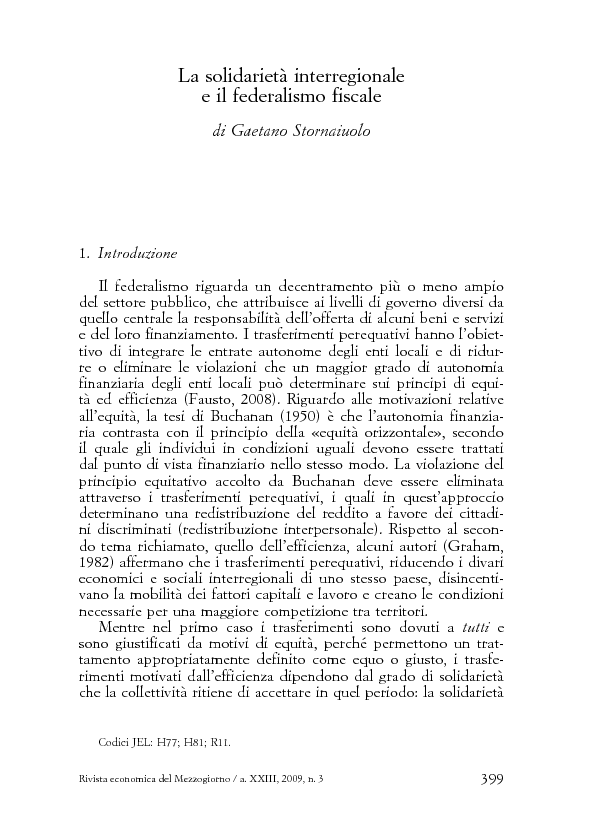