The peculiarity of local production systems is the cultural background of knowledge and cooperative behaviours that lead not only each company and its operating subjects, but the components as a whole, to the achievement of economic benefits that are the result of economies external to the firm and internal to the sector. The success of local production systems can be explained by the high degree of specialisation that in turn generates tacit knowledge that becomes more and more extensive thanks to the experience and the interaction between different actors. There is no doubt that their competitiveness and reproducibility come from the capacity to integrate tacit knowledge with codified knowledge, which guarantees the possibility of transmission both in the same production structure and among structures. The strong specialization in traditional sectors and consequently the implementation, even in these production areas, of incremental rather than radical innovations are often identified as the reason of the reduced competitiveness of Italian economy. Nevertheless, it is within them that the core of medium-sized enterprises developed, mostly structured as a multi-company group, which has a dominant position in market niches of global dimension. On the basis of such considerations, in this paper it will be checked, by using budget analysis and the information resulting from a direct survey, if there is an evolution of organizational structure in Apulian footwear sector, that allow better results in terms of efficiency and competitiveness. 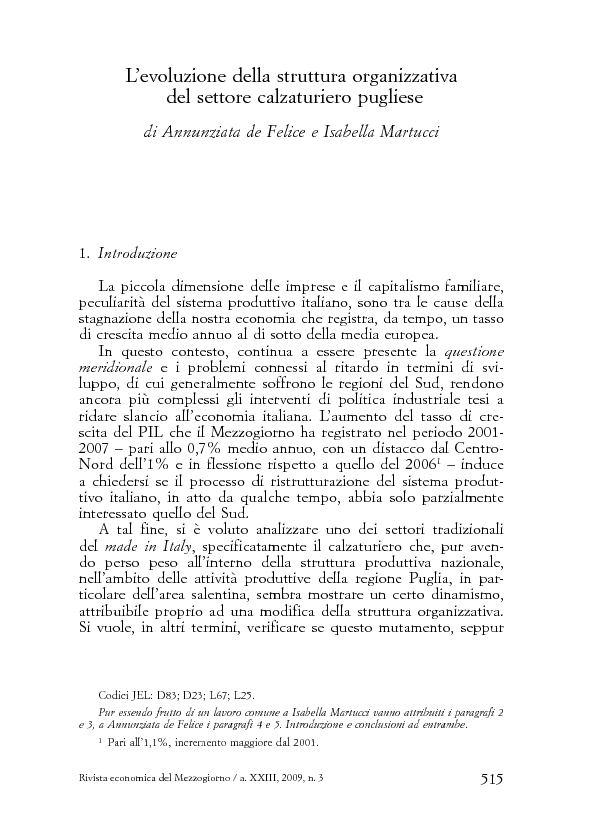