This paper analyses the evolution of EIB loans in Italy from 1958 to 2007, focusing on the following aspects: geographical localization (North/South), investors' nature (public/private), sector of activity, firm's dimension, value of investment. Since 1958 Italy has been one of the major borrower of EIB funds. The Italian share of EIB loans, although still relatively high in recent years, has decreased over time due to EEC/EU enlargements. Under both descriptive statistics and econometrics, EIB activity and Mezzogiorno role as a recipient of EIB funds emerge strictly linked to the extraordinary Italian cohesion policy implemented mostly through the "Cassa per il Mezzogiorno" (CM). Accordingly, between 1958 and 1984, EIB funds contributed to implement a big push strategy in the South of Italy, by financing mainly large industrial and infrastructure investment projects in Southern regions. The CM dismantling in 1984 led up also to the drain of EIB funds in the South of Italy. Consequently, from 1984 onward, the EIB financing strategy radically changed: funds in Italy started to be conveyed, mainly through the banking system, toward small and medium firms localized in the North. Therefore, as far as Italy is concerned, the EIB progressively changed its strategy, turning to be a lending institution operating for development without necessarily aiming at cohesion as a specific goal of its activity. 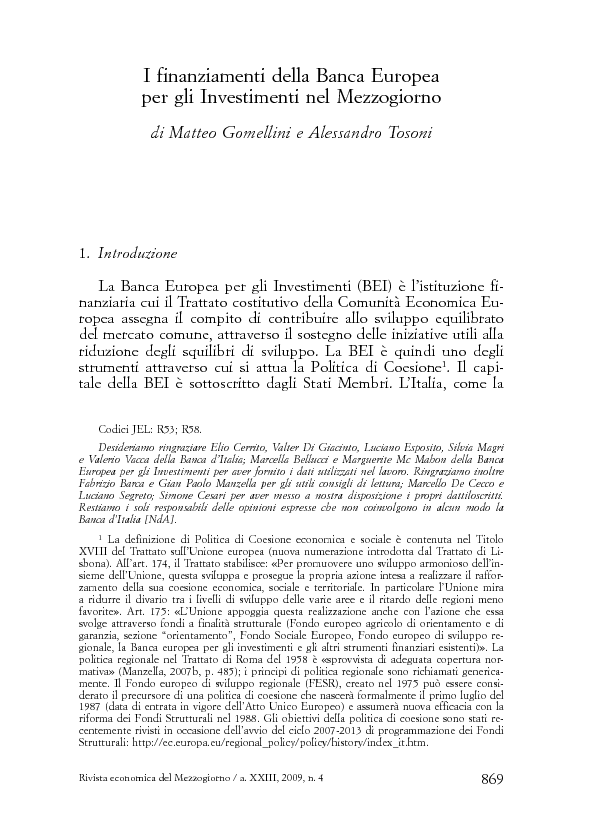