Keywords: Subsidies to R&D, Interventions for Technology Transfer between Public and Private Sectors

Among the policies needed to underpin the overcoming of our recent international crisis and to relaunch the growth, an important role has to be certainly recognized to measures supporting investments able to start up virtuous development processes in the field of research, innovation and technology transfer. This is another way to strengthen competitiveness, by favouring changes in the productive system- for instance, by promoting new value-added specialisations in manufacturing and services sectors, able to win new markets at international level. Such a demand, perceived generally all over the Country, is all the more urgent for the Mezzogiorno, not only because it is still characterised by lag structural factors which continue to hold down the potential for development of this area, but also because it is harder hit by such a crisis that has strongly highlighted the weaknesses of its production machinery. Within such a field, policies boosting the rise of high-tech businesses, by promoting closer collaborative relationships both between universities and research centres and between the latter ones and businesses of different sizes, seem particularly promising; such relationships are very important in order to facilitate technology transfer processes between public and private sectors. In this paper, after having reviewed the major indicators of development of research systems and new ICT spread, we present data, concerning the period 2003-2008, on all public subsidies granted to business research and innovation in the two big areas of the Country. A deep focus is addressed to those interventions aimed at favouring technology transfer processes between public and private sectors as well as the rise of businesses in innovative sectors, under way in Italy since 2000s, such as academic spin-offs, public/private laboratories and technological districts. Furthermore, we review the interventions started - but not yet effective - with the NOP «Research and Competitiveness» 2007-2013 for Convergence Regions, which in the near future are set to characterise research and innovation policies for the Mezzogiorno. Finally we present some reflections on potential recommendations in terms of policy. 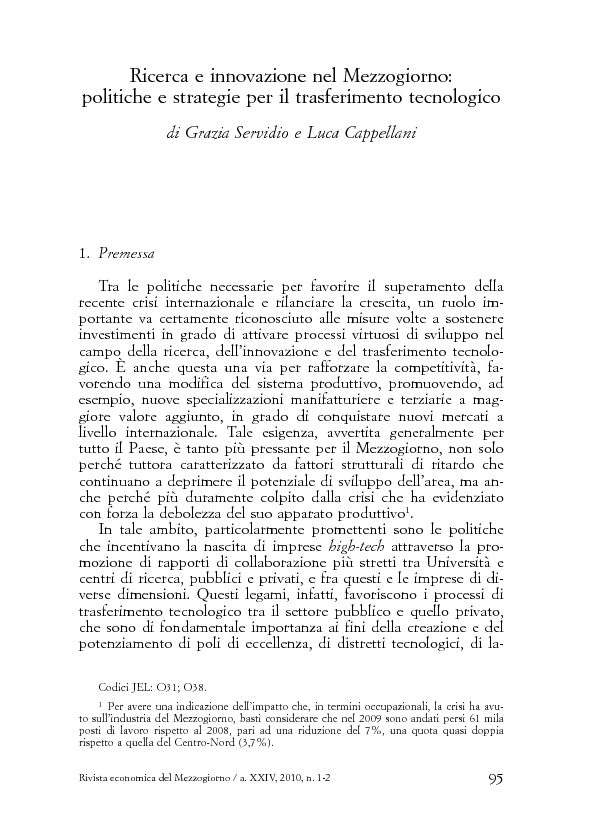