The importance of infrastructures investments is linked to their possibility of supporting aggregate demand in the short- and mid-period and of having an important effect in the long-period, by a structural rise of production level (so-called non-keynesian effect). Methodologies adopted in literature in order to estimate such effects are various. In this paper, using the information gathered by a reconstruction of public capital stock for each region, we present the results of an econometric analysis based on a VAR (Vector autoregression) model which allows to understand the relation between public capital and GDP, considering both direct and indirect effects. Over the last 40 years, average yearly investments in infrastructures have fluctuated about 2% of GDP. Resources earmarked to the Mezzogiorno have been substantial, if compared to wealth created: in 2000, in the Mezzogiorno the ratio between the monetary stock of public capital and GDP was still equal to about 80%, i.e. the double of the Centre- North. Data show that in recent years public capital growth rate in the South of Italy has been much lower. Public capital investments are an effective instrument of growth stimulus in the long-period - though also a positive and extended response of private capital accumulation contributes to such a result. These effects are present throughout the Country, although with different intensity. In particular, this study shows that long-period GDP elasticity to infrastructure spending in the Mezzogiorno is positive and higher than in the Centre-North. Nevertheless, in the South marginal productivity of public capital is lower, due to a higher ratio between public capital stock (in monetary terms) and GDP, to which a lower efficiency of public expenditure could have contributed. 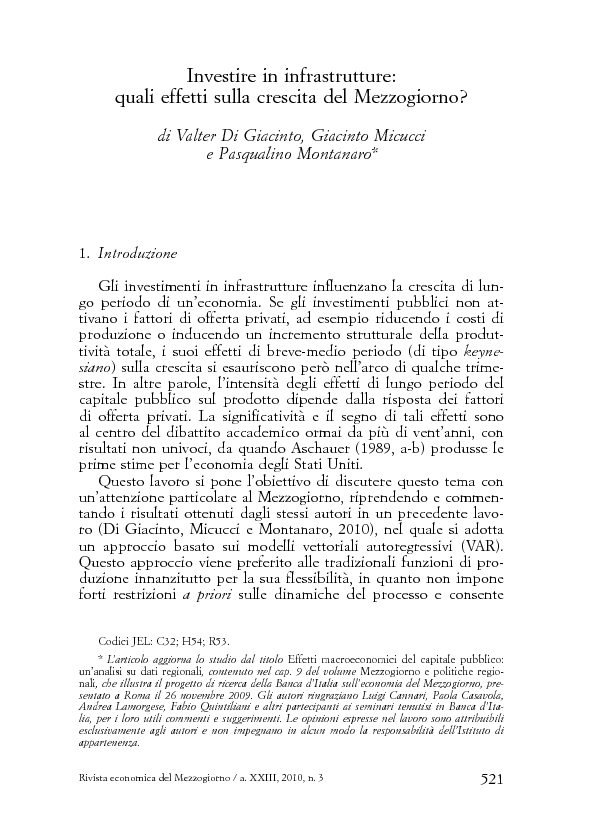