On May 4th, 2010, Italy approved the Directive of the President of the Council of Ministers on the Small Business Act to implement, among the first countries in Europe, the EU Commission Communication «think small first». The symbolic name of «Act» underlines the will of recognizing SMEs' central role within European economy and, for the first time, activating a very articulate framework of interventions for enterprises, thanks to ten guiding principles for policy formulation and implementation both at European Union and single Member States level. The SBA represents an acknowledgement of the economic and social role of micro, small and medium-sized enterprises, that is fundamental for improving European enterprises. Beside the «industrial policy», closer to medium and large-sized enterprises needs, the SBA has introduced a «new productive policy» related to micro and small-sized enterprises (MSE), mainly including tertiary, handicraft and manufacturing industry, whose interventions would strengthen the measures adopted within the «industrial policy», according to the principle of «supply chain» for services and industry. For this purpose, the SBA Directive outlines a «productive policy» complementary and not competitive with industrial policy, that pays attention to smaller enterprises' needs. According to some estimates, the SBA implementation over 2010-2012 could have a positive impact on Italian GDP growth of about 1%, thanks to multiplier effect; furthermore, it could contribute to the creation of about 50.000 new jobs. 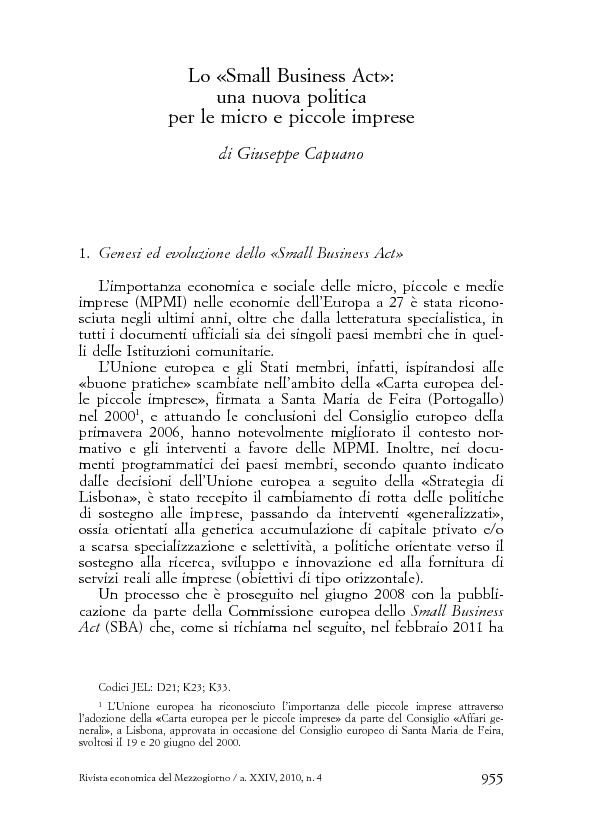