The analysis presented in this paper highlights entities, the main characteristics and dynamics of regional gaps in Germany and Spain. In the case of Germany, the geographical distribution of weak regions reflects the existence of a well-known West-East gap. After a first phase of sustained convergence in several indicators (GDP per capita, consumption per capita, productivity), following the devastating shocks represented by the unification, since approximately 1996 a second phase has followed, in which the catching-up process has slowed significantly at the aggregate level, with some particularly critical elements: (i) unemployment in eastern Germany has been higher than in western Germany; (ii) wages and average labour productivity have been lower in the new Länder; (iii) migration flows from East to West has been persistent, in particular among young people. Not to mention the large flows of public resources allocated to the Eastern Länder. In the case of Spain two «neighborhoods» have been identified: one in the South (Andalucia and Extremadura) and one in the North-West (Galicia). Regional gaps (and the relative positions of each region) show a high degree of persistence even when considering a very broad time interval: the top positions in the ranking of regional income (Madrid, Catalonia and the Basque Country) and the bottom ones (Extremadura, Andalucia and Galicia) remain unchanged. The weak internal convergence does not seem, therefore, be an exclusively Italian problem. The persistence over time of regional gaps in terms of income per capita seems to characterize the recent economic history of many countries. 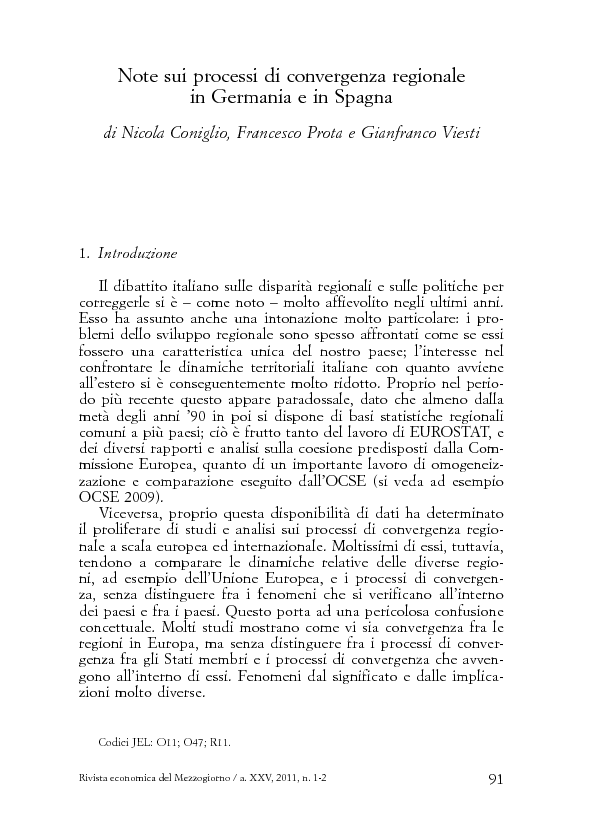