In the last decade the growth of Mezzogiorno has recorded a trend remarkably similar to the rest of the Country, though below the EU average. In order to help rebuild a highly discontinuous framework made of elements that often diverge in analysing the structural components of southern development, a scheme of microeconomic investigation has been adopted, which, from a medium-term observation, enables us to detect the influence of systemic elements on such a poor performance of the productive system, even compared to the non-exciting phase that the national economy as a whole has experienced. Many times context elements have been charged: external dieseconomies, gaps in the accumulation of tangible and intangible capitals, institutional and environmental fragility, southern regions' failure to take off. However, a generic list of critical issues constraining the growth is reductive for interpreting development aggregation phenomena, albeit fragmented and heterogeneous, that are spreading at the edge of too overcrowded metropolitan areas. For this reason, in this study we prefer not to pursue a scheme of analysis based on patterns of growth but to choose, alternatively, the more difficult path of field survey in order to provide a framework of those areas where the combined effect of active policies for supporting the business system and the achievement of a reasonable level of social capital has made easier the establishment of enterprises with adequate professional skills, which has highlighted evolving structural and environmental conditions. 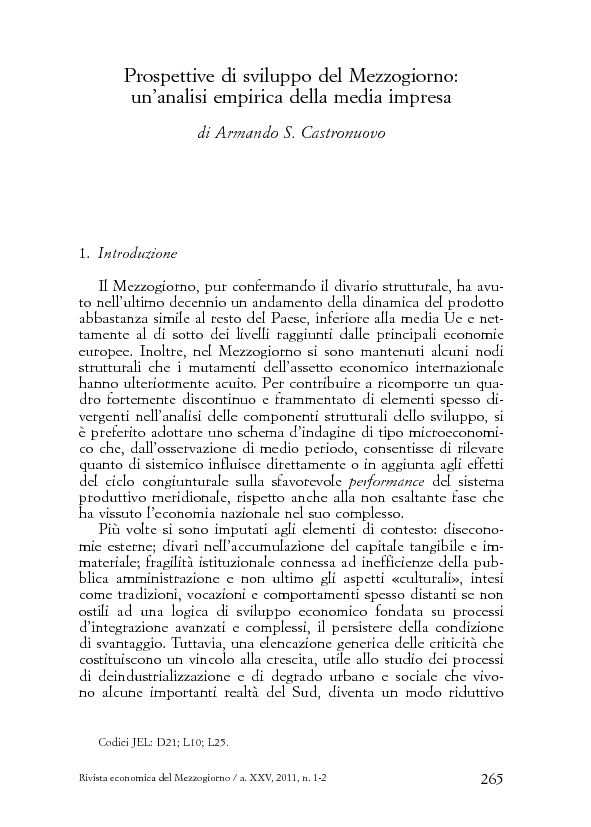