The aim of this paper is to provide a brief outline of the main stages - and their respective crucial points, solved or not - that have marked the spreading of industrial activities in the South of Italy from the Unification of Italy to this day, in the light of the policies adopted to favour its development. The choice of such a periodization has taken into account both the evolution of the economic framework and the phases gone through by the industrial policy in the South. What emerges is, firstly, a strong «hysteresis» of the industrialization process, from a territorial point of view. The institutional, geographic and infrastructural advantages gained by the North during the Protectionism (at the end of the XIX century) have represented the pre-conditions to this area's take-off, causing a development gap unchanged for more than fifty years. Between the 60's and the first half of the 70's, the industrial policy developed thanks to the extraordinary intervention proved effective, allowing to partially recover the Southern industrialization gap. From the second oil shock, changes in the macroeconomic framework, persistent institutional limits in the South and policy's loss of effectiveness have broken off the convergence process of Southern industry; on the contrary, in the last years, worrying signs of a growing divergence between the productive systems of these two macro-areas have been emerging. 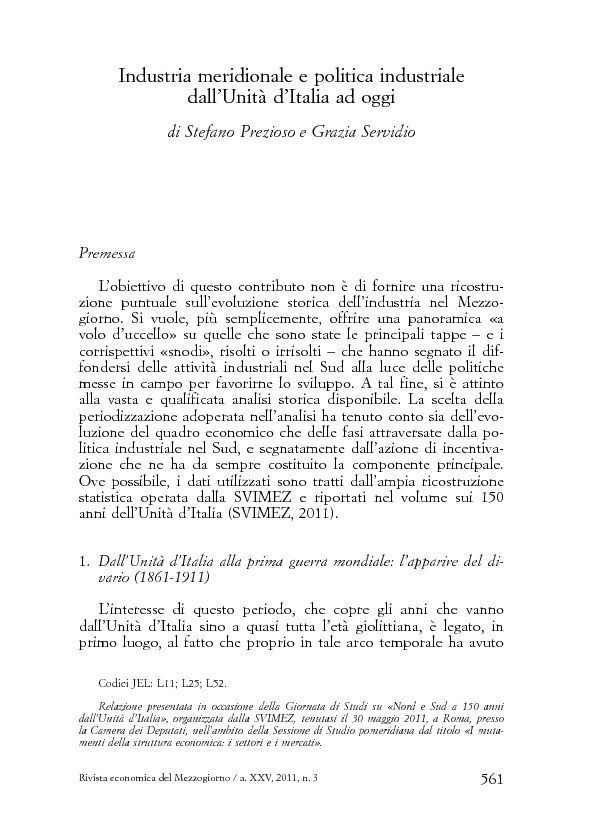