This paper deals with the problematic and complex framework of the relationship between human capital and the development of South's lagging economy. We will start by focusing - from a quantitative and qualitative point of view - on the processes of education and investment in knowledge, innovation and research. The first critical evidence is that, although important progress has been made in the field of education, it has not led to significant increases in economic wellbeing. The «Southern dilemma» to solve is where is the jam of the mechanism of development, which should have drawn an extraordinary lever for growth just from the accumulation of human capital. The answer suggested by the analytical evidence is that human capital, in recent years, has largely been «underutilized» for southern economic development, causing - along with a number of other factors - the interruption of a positive trend and even a process of depletion of the human capital in this area. Our idea is that economic and social factors - both current and prospective - have become and will become ever more crucial in the education choices of new generations. The process of accumulation of human capital, fundamental for the development, risks being undermined by poor economic performance, which will affect in particular labour market, and by the serious inadequacy of the institutions responsible for promoting the transition from education to employment. Therefore, it is necessary to implement a wide range of policies - from «differentiated» educational investments to bridge the gaps as well as effective policies for job guidance, to selective industrial policies which support the demand for skilled workers - in order to come out from the «trap of underdevelopment» of the South of Italy. 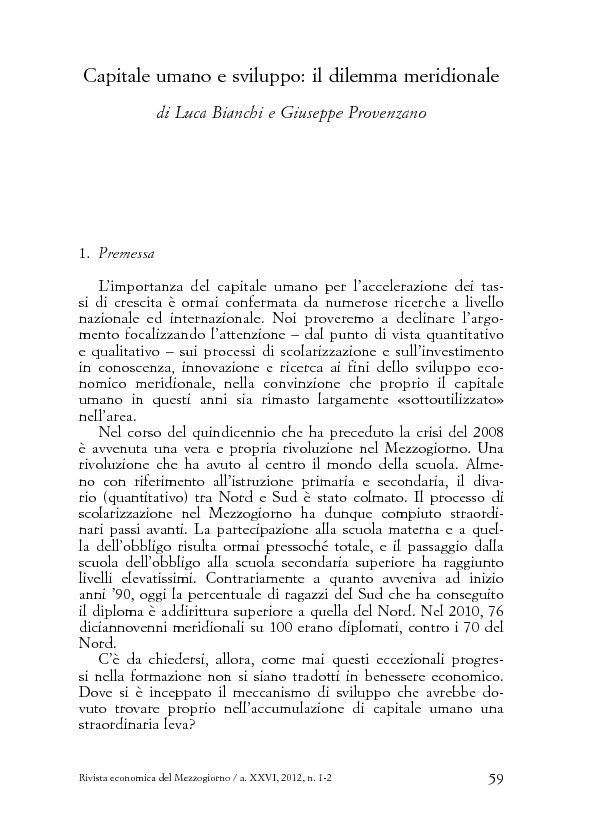