Recent studies have shown that a more effective and efficient use of resources in education and training seems not enough to motivate graduates to enrol at university; in the last years, the Italian evidence proves a downward trend of the rate of transition to university - that is the ratio between the students enrolled at university in a certain academic year and the graduates in the previous academic year -, which highlights a tendency to decrease human capital investments. This paper aims at examining the socio-economic and cultural issues affecting the decision of young graduates to defer their entry into the labour market by investing in university education, as well as at highlighting potential differences between the Centre-North and the South of Italy. By using panel data regression techniques (20 Italian regions from 1999 to 2009) we will focus on the impact of two groups of variables - expenses and context variables - on the rate of transition to university at the regional level. By comparing the two Italian macroareas, it appears that, in recent years, the return on education - a fundamental variable when deciding on enrolling at university - is higher in the Centre-North than in the South of Italy. Moreover, our results will highlight that the rate of transition to university depends on the economic situation of our Country and, considering that human capital must be a driving force for economic growth, investing in it cannot be a consequence of economic growth. Within such a framework, public intervention to support university education is needed to avoid a vicious circle that in the long run will have negative effects on economic growth. This reflection does not seem to have inspired the Italian legislator when adopting the last university reform - which, on the contrary, seems to be going in the opposite direction. 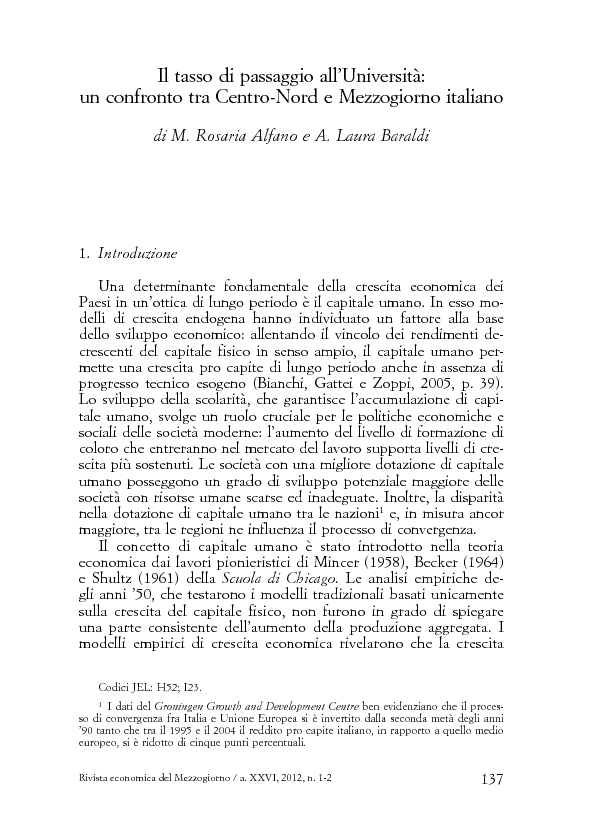