Within the more general Italian urban question, a southern urban question surges long since. The crisis of the city of Naples is the most obvious manifestation of it. The decline of Naples began in the 1970s, with a progressive reduction of its role and influence in the southern and national territory. Since then, uninterruptedly, Naples has lost population, falling from about 1,250,000 inhabitants to just over 950,000, giving rise to a real downsizing that involved systematically its productive assets, its business districts, its appeal towards investors and capital, tourists or even only migratory flows, finally also the ability to design scenarios for the contemporary world in a vision for the future. The responsibilities of directors and political forces in the events that mark the last three decades in Naples are several and of no small importance. However, it is indisputable that a variety of economic, social, culture, information actors have contributed to obtain the results here described: some of them have been involved directly, finding sufficient interest and self-interest, others have been passive witnesses, refusing to play that critical and independent role needed in such contexts. In this context, the prospect of the birth of the metropolitan city of Naples may be an opportunity to reverse the decline: it is a city of three million people who have all the power to regain its centrality and role in Europe, under construction, and in new geographical dimensions. 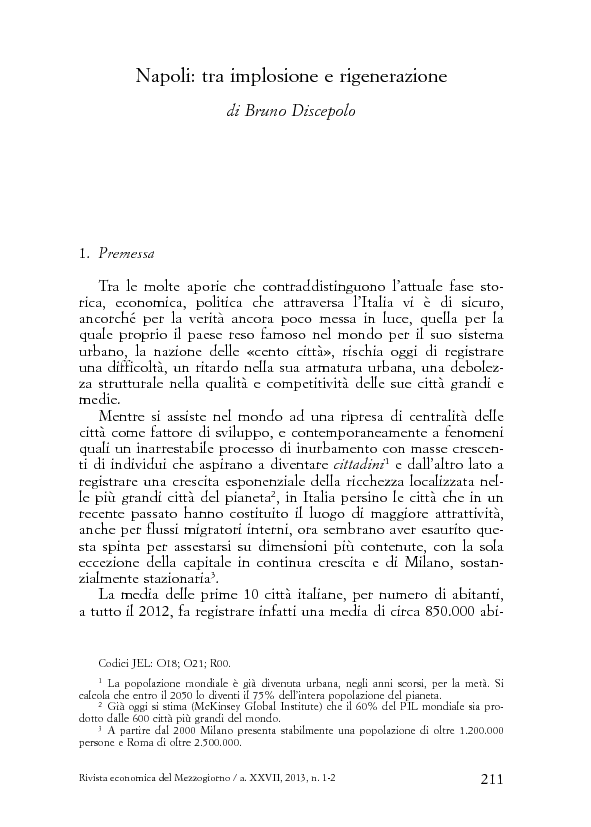