The gamble of the euro starts from the belief that a single currency for a single market would have opened again the road to unification process and created an economic environment capable of balancing competition and the diffusion of knowledge. The positive relationship between a single currency and a single market was certainly a necessary condition to restart the integration process. Nonetheless, it was not a sufficient condition. The optimism about the recovery of the European project, and the emphasis on the benefits that a single currency, combined with the network of the single market, could generate, put in the shadow the costs necessary to close the real imbalances within the market itself in terms of technologies and institutional set-up. The differences among the countries of the Eu were undervalued. The positive knock-on effect of the single currency overshadowed the economic policies necessary for integration. Minimizing the size of the distortions triggered by an excessive tax burden could be a first step towards the removal of frictions that prevent a recovery of growth in the Euro area, notwithstanding the need of Governments and Parliaments of finally leading the development in the European Union. At the root of this reconciliation between the characters of the economic policy of the Euro area and the strategies of the Nation-States, members of the European Union, there are some more questions. The European economy, and its currency, can match characters of an optimum currency area? How to combine the convergence among European regions, and precise solutions for each of the regional economies within the European Union? Will the debt be absorbed by broadening the growth or does the presence of debt, and the use of strong deflationary policies, to reduce debt, preclude a real possibility of growth? 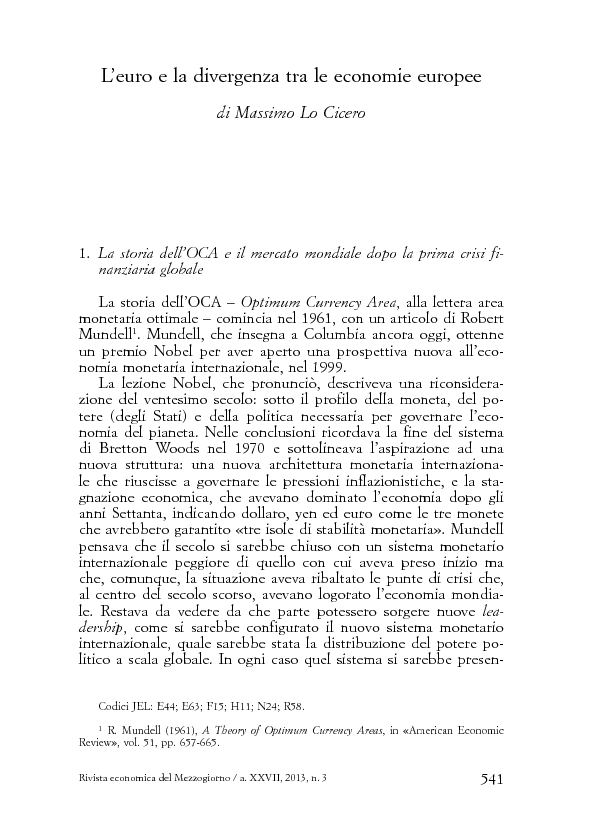