The paper on IRAP (i.e., the Italian regional tax on productive activities) to be published in the no. 4/2014 of the REM aims at in-depth analysing and checking the SVIMEZ proposal on the abolition of IRAP on manufacturing firms. This paper is a continuation of SVIMEZ papers on the same issue published since 2012 - the note by Moro and Pica published in November 2012 and, lastly, two Journals (no. 39 and 42) published, respectively, in 2012 and 2014. The underlying issue is the object of IRAP. It is a tax whose tax base is the value added. As in the case of VAT - which, ultimately, the tax is measured to and that constitutes its «reason» - it is, however, different from the tax base of it: in the case of VAT, undisputedly its object consists in consumption expenditure; through a completely analogous reasoning, we conclude that the object of IRAP is the sum of consumption, investment, exports, net of imports and depreciation. However, such conclusion for both taxes is based on the assumption that the levy is transferred forward, along the chain of production and distribution of goods: this assumption is accepted, more or less undisputedly, for the VAT, but it should be specifically demonstrated for the IRAP. In this respect, the paper by Pica, Pierini, Villani highlights serious indications, but not conclusive evidence. The analysis, carried out by region and by sector, with reference to the prices of investment goods, shows changes in both directions, which can be connected to changes in the IRAP system. There is, however, a serious shortage of available data, which prevents us from considering the evidence shown in this paper as a definitive proof. IRAP issues are particularly serious for companies operating in the so-called «Skunk Regions» of the South (so named by Luca Antonini): they shall be liable to high rates of IRAP, which lead to, or can lead to higher price variations regarding consumption, investment goods and exports, thus seriously compromising the economic development of the territories. It has been shown, among other things, that higher IRAP rates lead to a greater benefit of the State, with regard to the tax on profits, to the detriment of southern firms: the State makes money as the tax base of taxes levied on profits includes the same IRAP (that is, a tax on a tax is applied, even if the profit, net of IRAP, is negative). Despite various requests, the Constitutional Court has decided not to resolve such apparent anomaly. 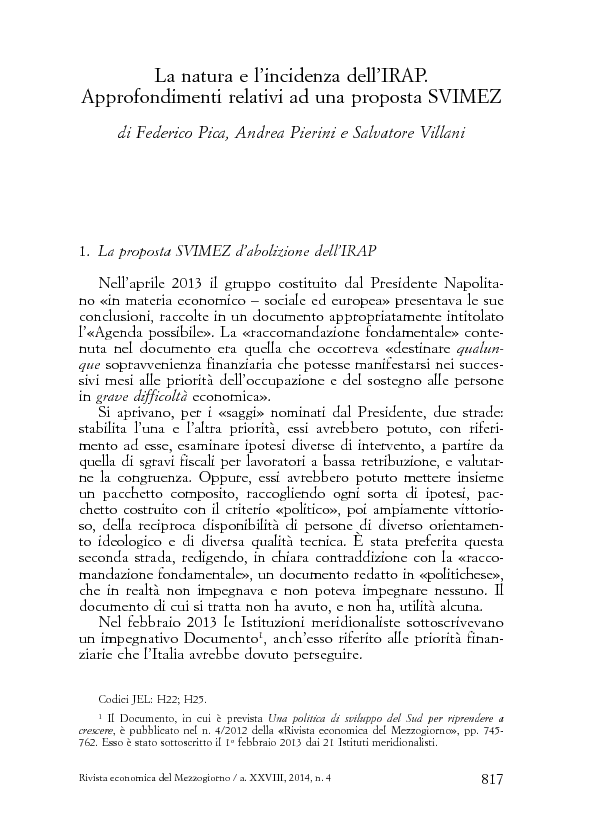