This paper aims at defining a form of relationship between the nature of enterprise systems and the characteristics of territorial areas and metropolitan cities. From an economic point of view, it seeks an interpretation that can use the concept of a supply chain in terms different from those traditionally expressing the existence of a vertical integration, from raw materials to the finished product. Such vertical integration becomes a framework to understand the relationships among businesses, as opposed to horizontal integration, the industrial district: a cohesive system, defined within the boundaries of a territorial space. A third type of business systems is also identified: thanks to the increasing integration of markets, the so-called globalization of the economy, the notion of fragmented supply chains is also defined. This last and recent kind of chains has a basically latitudinal size, expanding horizontally also parts and specific sets of the vertical supply chain. In the second part of the paper, we examine macroeconomic factors that bind the gaps and the dualism of the Italian economy to the need to integrate these phenomena with the monetary and tax policies necessary to achieve a recovery of the European economy and a greater convergence between the Member States of the Union itself. The aim of this diagnosis is integrating territorial areas and sectors of the Italian economy to make cohesion between Italy and the European Union stronger. In this way the keystone, which connects the city of Naples to the North West of the north (Piedmont and Liguria) becomes the crucial link of the «Western Comma»: a connection running along the Tyrrhenian coast that is based on indented supply chains, which are separate but consistent in the continuity between North-West and mainland South, considering the latter as a potential future macro-region in the Italian economic landscape. 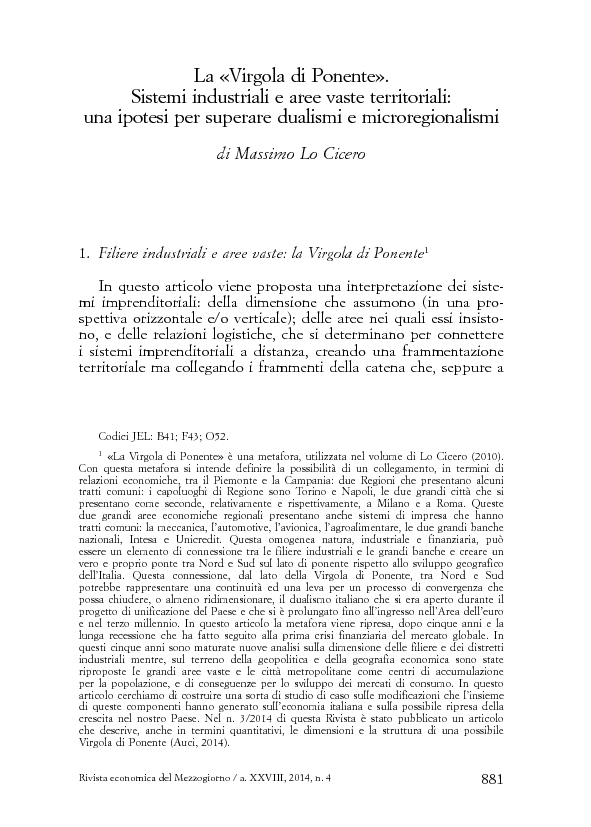