Until past years business cycles occurred on a regular basis, along which a systematic sequence of an upswing, culminating at a higher turning point, and a downswing, ending in a lower turning point, followed one another. But it is more than twenty years by now that our economic system is no more predominantly affected by the effect of cyclical fluctuations, since its dynamics were characterized by more strictly structural fallouts, much deeper than the first ones. The radical changes occurring in the economy have also bounced off the scholars, many of them turning from «experts in short-term policies» - i.e. «conjuncturalists» - into «structuralists». The analysis of the GDP for a long period (1931-2013) has entailed, "inter alia", the research of aggregates for which data were available for a so wide time span and could be taken as explanatory variables of the national business cycle. These aggregates were represented by the overall electricity consumption and the number of cars in circulation. We managed, even by means of "ad hoc" processing, to reconstruct (and complete) the entire time series. Inserting such variables in appropriate regression functions and comparing the respective data obtained with the GDP of the entire Country, we found that only the trend of electricity consumption overlaps almost entirely the trend-cycle of the system, thus being considered as a coincident variable. On the contrary, the car fleet presents instead a «delayed» trend effect compared to the business cycle, being accordingly considered as a lagging variable. With specific reference to the two main areas of Italy (Centre-North and South) we found that, while in the stages of recovery and acceleration of the national business cycle, the GDP in the Centre-North has perceived in advance ongoing change, reporting considerably high increases, the opposite occurred in the South, which, in addition to adapt to changes in the economic framework with a certain lag, showed lower increases. Only in one case the South showed to move earlier than the national business cycle, therefore with respect to the Centre-North: but this happened in the downturn, during which it recorded well in advance GDP contractions, proved to be more marked than those of the Centre-North. 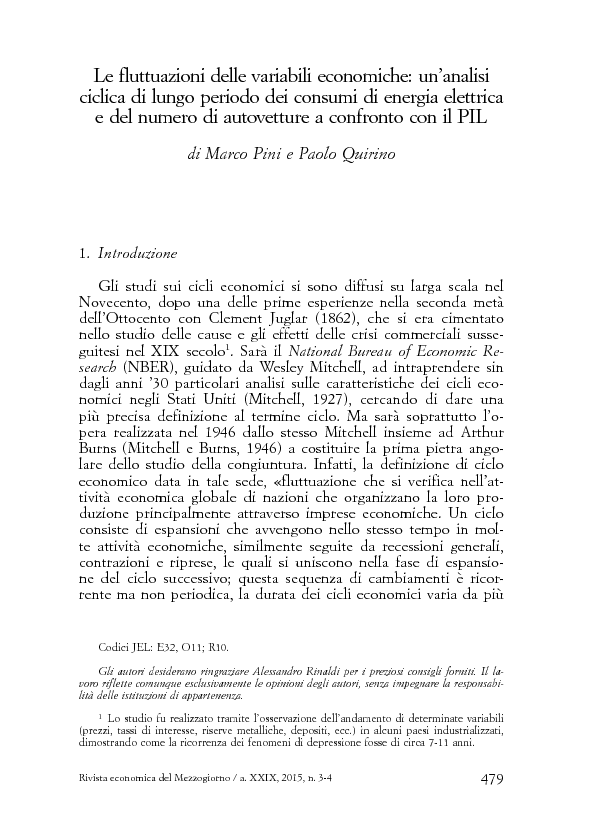