This paper carries out an analysis, at territorial level, of those instruments aimed at directly supporting investments, with regard to the main objectives of industrial policy. After an outline of the trends of the industry, before and after the crisis begun in 2008 - which has shown an increase in productivity and competitiveness gaps between the South and the rest of Italy -, it makes an international comparison between the different "modus operandi" of industrial policy. During the years of crisis Italy, unlike what happened in other major developed countries, has reduced the resources devoted to industrial policy, damaging especially Southern Italy, even though it represents the most delayed area and that most suffered the effects of the long recession. Hence, the need to put in place a strategy of national and regional industrial policy, pegged to a medium to long term vision, that takes as its priority the recovery of the process of industrialization of the South of Italy, in addition to the more general objective of the defence and the adaptation of the most competitive components of the national production system. It is a question of rebuilding a wide range of interventions, diversified across regions and adequately equipped in financial terms. In a short-term perspective, to contrast with the current recession and lay the foundations to start to build a strategy of more comprehensive industrial policy, this paper aims at strengthening some of the tools of industrial policy already effective or underway, which could allow to quickly get tangible results if addressed to Southern Italy. 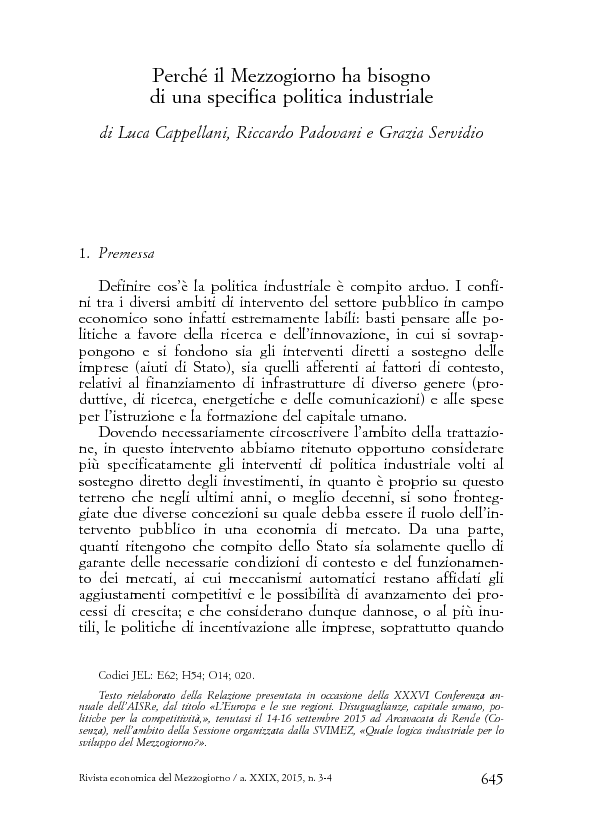