This paper proposes a descriptive analysis of the structural features of olive cultivations and olive oil production in Italy, through a longitudinal approach. The time period analyzed is mostly 1990-2010. The work is based on the integration of selected statistical data with the number of agricultural holdings which have olive trees, their agricultural surfaces, the estimated production, the quality productions and the recourse to organic farming. The territorial detail is regional, with additional details by province. The main purpose is verifying the level of production concentration in few regions, its development along time and the role played by geographical location as regards recent trends. The work also develops some policy reflections in the light of the problems arising from the recent reform of the Common Agricultural Policy (CAP). Data derive from the integration of various sources: agricultural censuses, farm structure sampling surveys, crop statistics, administrative data, household budget surveys. Some estimations were needed as regards olive oil production. Amounts, longitudinal changes and specific ratio indicators have been calculated at regional level. The whole analysis is based on official statistics data and start from 1980, since before 1980 different definitions and concepts were adopted in the framework of agricultural censuses. The main results show the persistence of strong localization of olive oil production among few Southern regions, the late development of quality and organic farming productions spread among Central and Southern Italy and the steadiness of household olive oil consumption along time, with slight differences among regions. Some of the main outcomes are the following: a) since 1990 the number of agricultural holdings and their utilized agricultural area has sharply decreased, while the decrease of holdings with olive trees has been very much slower and their agricultural area has increased; b) as regards olive cultivations, the percentage of micro-holdings (less than one hectare) increased along time; c) the degree of concentration of olive oil production in Southern regions did not decrease along time, and also yields remained steady; d) quality olive oil productions are becoming more and more relevant in Southern regions, while organic farming cultivations characterize some regions located in Central Italy. 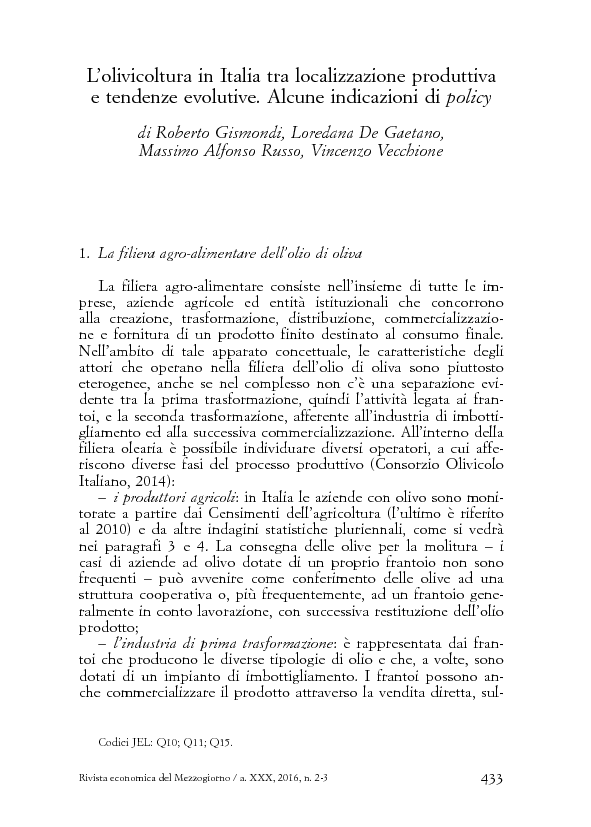