Within the ample scope of urban regeneration, a very particular role is played by the part relating to the culture-led component, that is, regeneration based on both tangible and intangible cultural heritage. In the European and North American scientific literature, culture-led regeneration has not theoretically unambiguous meaning and, anyway, the experiences suggest distinct features, as shown by some of the most important cases: Bilbao, Glasgow, Newcastle, Liverpool, the Ruhr region, Leipzig. In Italy, there is not a tradition of similar studies, which is definitely cause for wonder if we consider how broad, spread and significant is cultural heritage in our Country. Similarly, cases of practical application appear limited, despite being present situations entirely comparable to those of the above-listed cases. Such a situation leads to the conclusion that it is necessary to follow a path that gives culture a leading role in the regeneration processes of the city. In this sense, the designation of Matera as «European Capital of Culture 2019» is a not-to-be-missed opportunity to start a coordinated set of training, research and planning activities, that, from 2019 on, make Matera a point of reference for national regeneration policies based on culture. 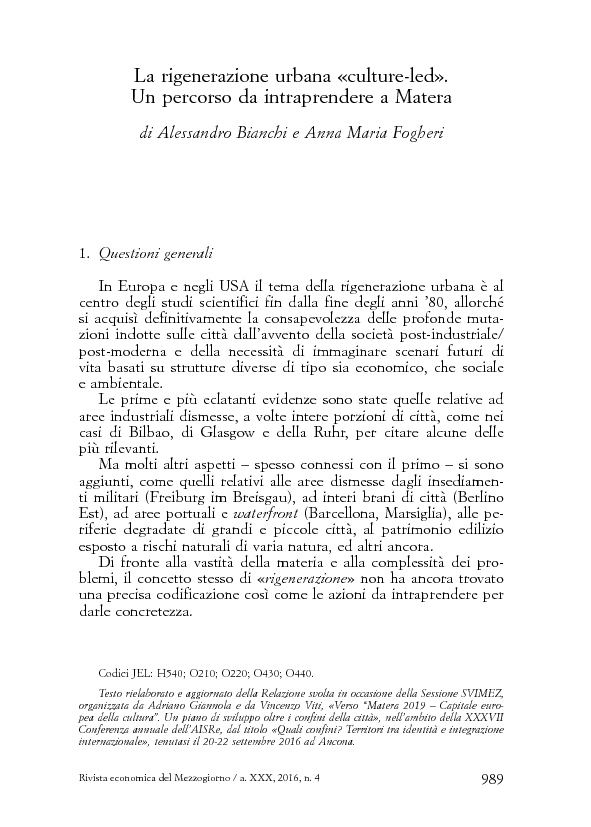