Several University policy interventions have been implemented over the last ten years. Overall, they have had the effect of reducing tertiary education in Italy and in particular in Southern Italy, compressing and distorting academic offer and reducing the demand for education, through strong political choices. Such choices damage both social mobility and the overall development prospects of this area (as well as the country as a whole), given the fundamental role played by Universities and human capital both in the contemporary and future economy - as it is reasonably foreseeable. This paper summarizes the main lines of these policies, recalling the great disinvestment on University education carried out in Italy over the last ten years, illustrating and discussing the choice to segment - in this overall scenario - the national University system in «first-class» and «second-class» Universities, and presenting how this choice was made; highlighting some reflections on the research evaluation processes, and their use as an important tool to promote and emphasise this segmentation. Then, the paper shows how all these decisions have consistently aimed at a strong compression, in particular, of Southern Italy's University system, destined, thanks to the automatic and cumulative action of rules and indicators, to continue over time. 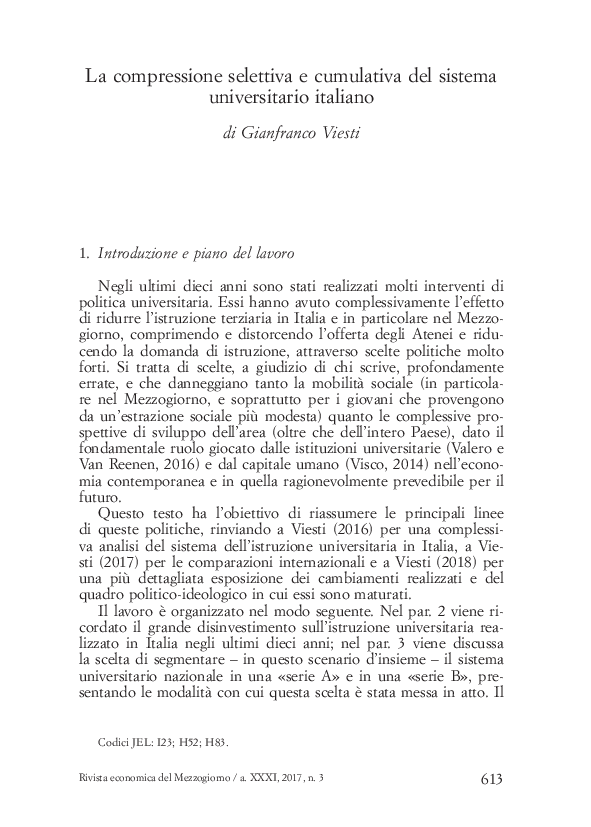