The critical issues that Italian banks have shown over the last decade are largely related to the extremely negative performance of the production system and of GDP, which in 2017 was still 5.5% lower than in 2008. The consequent prospect of a deterioration in credit quality leads financial institutions to adopt tighter loan policies. However, such behaviour is also the consequence of a model of supervision that has been characterized - due to the revision of the Basel agreements and the interventions of the ECB and ESMA - by the imposition of increasingly pressing and generalized constraints to all categories of brokers regarding capitalization, liquidity and risk management; this occurs in order to allow, at a micro-enterprise level, greater resilience to adverse situations. On the other hand, at a macroeconomic level, this approach imposes constraints on banks, not allowing them to support the production system. Therefore, the consequent credit tightening fails to contribute to a significant level of business growth in the more developed areas on the one hand, and compromises the prospects for development of production activities in the weakest areas - especially in the southern regions - on the other. Ultimately, the accentuation of such dualism undermines the establishment of a virtuous relationship between the borrower and the fund manager, not contributing effectively to the aim of the stability of the banking system. 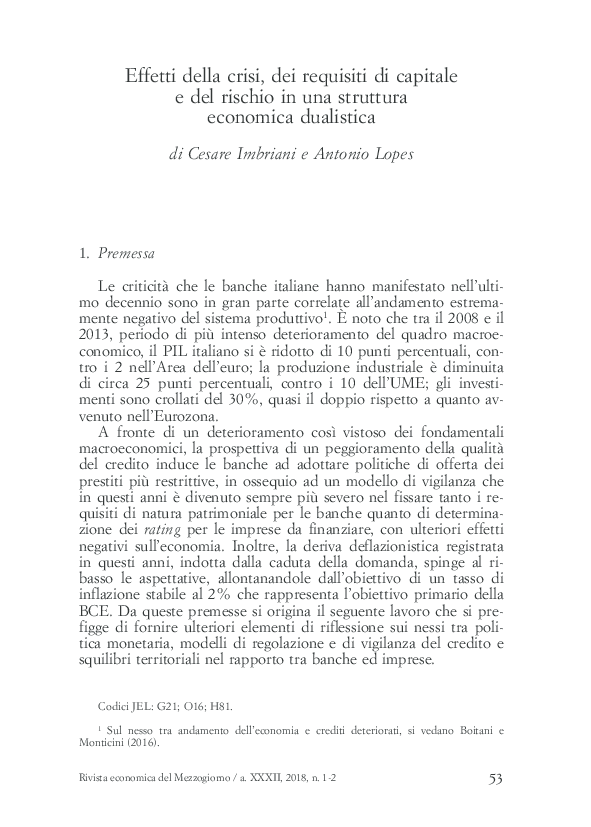