This study aims at analyzing the economic impact on the southern regions of the phenomenon of university student migration towards the regions of the Centre-North. It is based on data available in the National Register of Students database, relating to students enrolled in Italian universities in the year 2015-2016. The database collects the personal data of its members, including those relating to the residence, and includes the geographical indications of the Universities considered. For the academic year analyzed, there are 151.705 students residing in Southern regions transferred to Northern Universities, equal to about 9% of the total student population. Then, the costs related to the housing and consumption of out-of-town students have been taken into consideration, as well as the impact deriving from lower current expenses (teaching costs, teaching services costs) incurred on site by the Mezzogiorno universities due to a reduced demand of services. Capital expenditures, such as the restructuring or building of a dormitory, although they have a very significant impact, thanks to a higher multiplier effect, are not the subject of this study. Therefore, student migration causes, in terms of financial impact, an overall annual loss of public and private consumption of about 3 billion euros and a lower aggregate income in the Mezzogiorno of about 0.4%. Considering these results, in the context of the poor performance of the Southern regions in terms of growth, the phenomenon described by such data presents a significance worthy of notice and intervention. 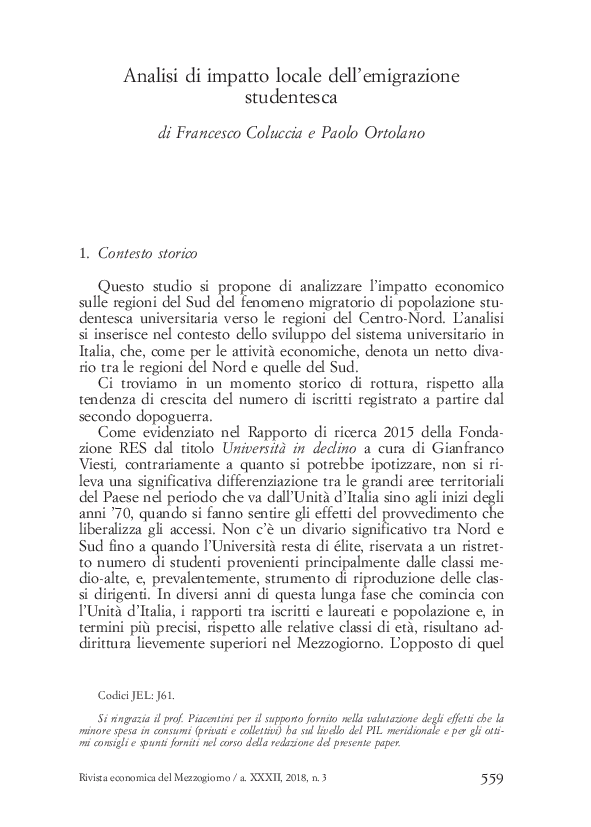