Social services are a crucial component of development processes, as the European Union has recently proposed again with the social investment strategy. Their strengthening does not only pursue objectives of social justice, but also of economic efficiency. And yet, since the 1990s, also following the unification of the European market, social services have registered significant restructuring processes throughout Europe, characterized by a decrease in public support and different forms of privatization. Such processes have become more marked after the 2008 economic crisis, especially in the countries of Mediterranean Europe. In Italy, the public supply of social services - especially care services for early childhood and for the elderly - has been particularly affected by cuts in public spending, which have emphasized the already existing territorial gaps. In fact, the Italian welfare model is typified as a regionally very diversified system, both in the level and in the quality of the services offered, with strong differences between North and South. This essay is divided into three parts. The first one briefly outlines the debate on the role of social services in welfare and in the economy and on the recent restructuring processes. The second part documents the regional gaps in Italy, both in terms of social expenditure for care services, and in terms of organizing the supply of such services. The third part debates the reasons and effects of such gaps on the overall development of the Country. 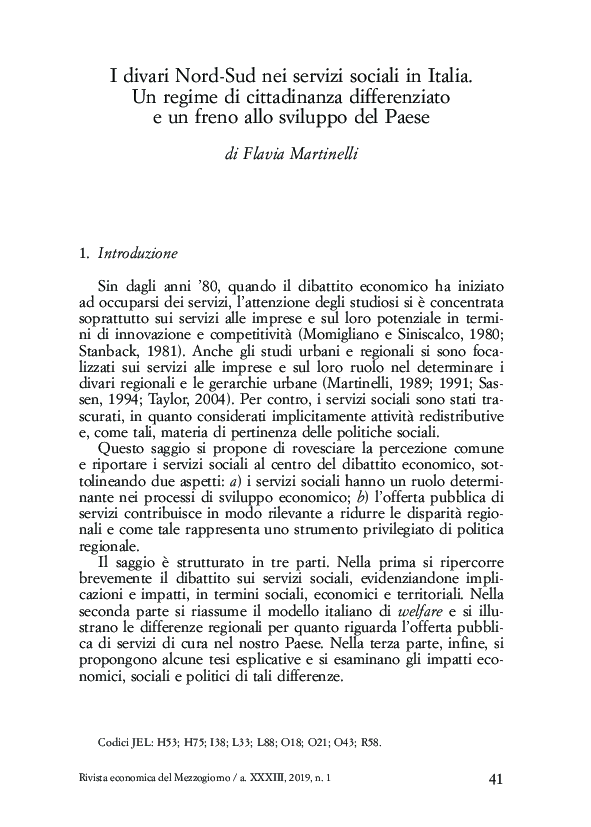