In Italy, over the last decade, a heated debate on the implementation of the so-called «differentiated regionalism» has gradually developed. This article, starting from the analysis of the draft agreements between the Italian State and the Regions interested in having greater autonomy, wants to show how these documents attribute unjustified privileges and guarantees to the aforementioned Regions, resulting in conflict with the constitutional and ordinary rules on the financing territorial governments. The article also wants to demonstrate that the useless and instrumental debate on the fiscal residue provides an incomplete and incorrect analysis of the issues of the territorial development gaps and the resources necessary for implementing the differentiated regional government model. Such debate is only intended to divert the attention of the people from other more important issues concerning the State duties established by constitutional rules and what citizens expect from it in exchange for taxes paid. From this point of view, the issues addressed in the article and the empirical evidence gathered show how the differentiated regional government model is totally inadequate to solve these problems. From the analysis carried out emerges, rather, the urgent need to begin a serious reform of the state and local fiscal system, in order to increase its redistributive effectiveness, and to complete the implementation of fiscal federalism with the introduction of essential service levels (Italian LEPs) and of a serious system of financial and infrastructural equalisation, which can really serve to reduce economic inequalities and guarantee the same development opportunities for all territories. 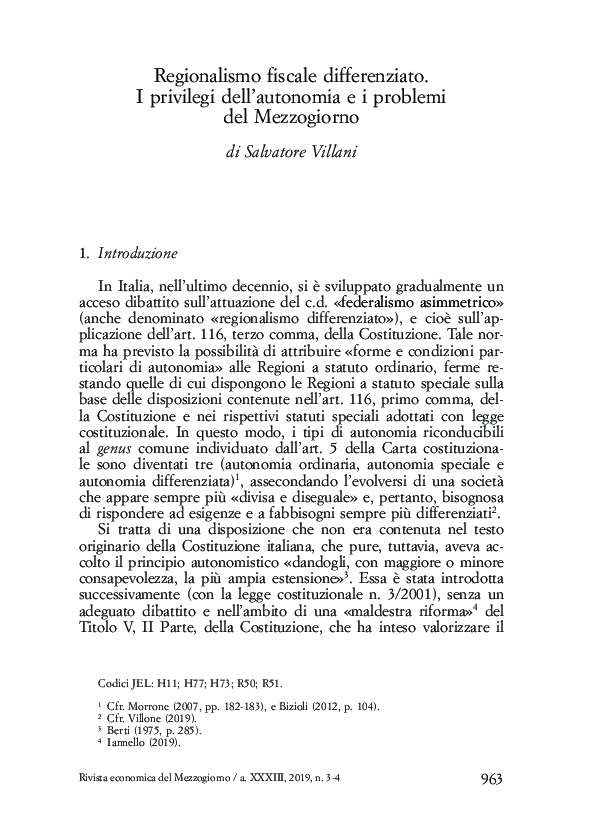