The economic approach proposes three main rules of antitrust law interpretation: the prevalence of substance over form; a practice cannot be deemed unlawful unless it produces a reduction of consumer welfare; a practice that reduces consumer welfare may still be lawful if the loss of consumer welfare is offset by an increase in efficiency (balancing test). To make sense of the "substance over form" principle, we can read it as an "effect's doctrine". But rules focus on structural elements not because they ignore effects, but in order to capitalize on the results of experience. If the effect's doctrine purports that experience is irrelevant and every case should be treated as a new one, it collapses in a concept of law (the s.c. "free law" or "case by case" justice) which is contrary to our legal tradition. The economic approach advocates the centrality of the notion of "consumer welfare". It attempts to present the antitrust judgment as encompassing a simple trade-off between different requirement of the same individual(s). This is not the case. Most anticompetitive practices that increase the welfare of some consumers decrease the welfare of others. Antitrust rules - as most legal rules - resolve conflicts between different interests of different individuals. If this is so, the notion of consumer welfare is useless. The real important point is: what criteria should we use to compare these interests? Among the mechanisms to allocate goods, the market mechanism by its own nature has an important characteristic: the market accepts high levels of inequality not based on the merits (result), but only if inequality is due to casual outcomes of the market mechanism (process) and not to a decision by an individual or a group with greater power. If the economic approach sees competition not in terms of a process but in terms of market performance, it encompasses a fundamental mistake. It ignores that individuals are not indifferent to the way a certain result has been obtained. It is not the same if I cannot go out because of a storm or because someone locked me in. It is not the same if I, consumer, am disadvantaged because of the casual outcomes of competition or because of a decision by a monopolist. 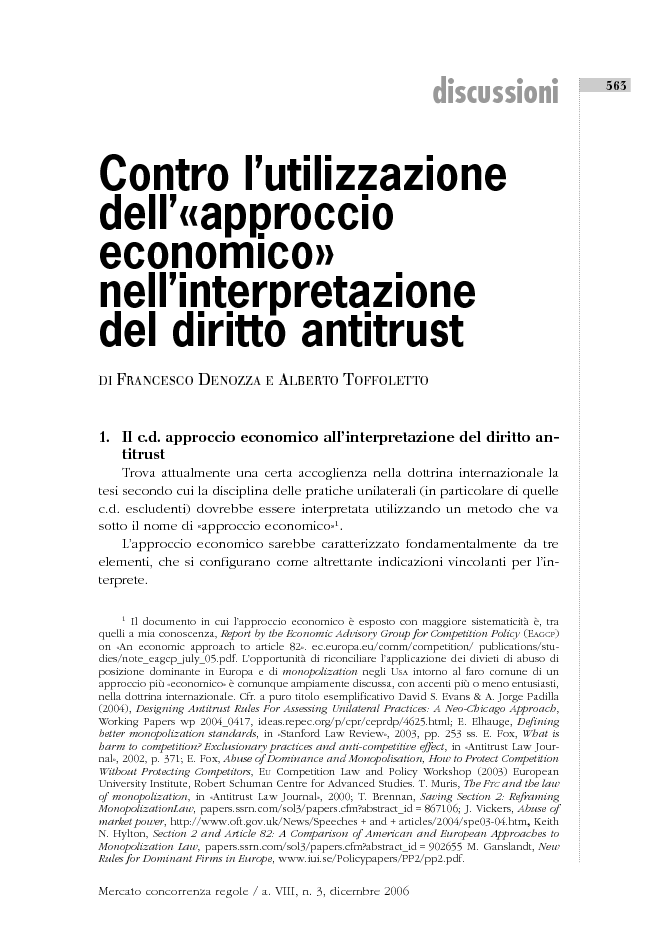