The issue of Sovereign Wealth Funds has gained relevance in recent years, during which the number and potential of SWF investments has grown progressively. The public nature of the investors and the lack of specific regulations have led many States to adopt protectionist measures. The matter may be dealt with from two standpoints: that of investor states - or home states, and that of the states in which investments are made - or host states. This paper studies the former aspect in detail, trying in the first place to provide a definition of "sovereign funds" that may be useful for an accurate classification of these funds and a clear definition of the relevant rules by scope of application and purposes. The paper then reviews the contents of the rules called for in the economic literature (law scholars have not yet disclosed their opinion on the matter) and enforced (in part) by international institutions, focusing on the so-called "Santiago principles", an ethical code that so far represents the foremost (but still insufficient and hazardously "mobile") frontier of a comprehensive discipline. Lastly, the paper proposes three tools to convert the existing ethical code, implemented on a voluntary basis, into an effective deterrent for sovereign wealth funds and a real guarantee for host states. The first tool consists of implementing certain restrictive measures, at host state level, only against those funds that do not comply with the ethical code. The second tool consists of using the ethical code, at international level, as a benchmark in bilateral treaties on investments; the high level of standardisation of the latter might lead, prospectively, to introducing benchmarks in regional agreements and eventually to the negotiation of multilateral agreements on investments, that have now become indispensable. The third tool consists of shifting investment flows towards symmetry by increasing sovereign funds in European States, coordinated with one another by a network of independent authorities, and aimed at making intra-EU investments. 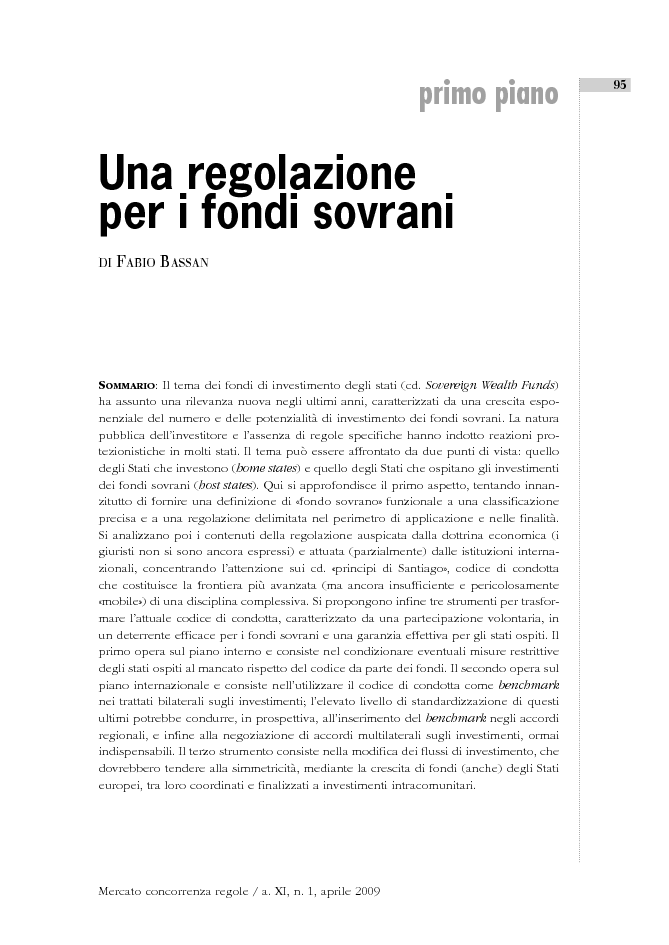