Should hostile takeovers be regulated? And if so, how? The paper provides an answer to these questions, which have become controversial issues in Italy after the hostile acquisition of Telecom Italia by Olivetti. In order to answer the first question, the paper highlights the main economic factors which any policymaker should consider when deciding whether and how to regulate takeovers: the positive externalities associated with an efficient market for corporate control; collective action problems facing the target's shareholders, which may lead both to the failure of value-creating takeover attempts and to the success of inefficient ones; the role of the target's management, which has strong incentives to fight against any hostile acquisition (no matter if "good" or "bad" for the shareholders). The paper then criticizes the idea, recently proposed by Jonathan Macey, that takeover regulation should consist only of a public control of the defences put into place by the target's management. Then, the paper describes an alternative model regulation for takeovers, based on shareholders' approval of all defensive tactics, on specific rules aimed at granting that the majority expressed by the shareholders is not tainted by conflicts of interest, and on "market-mimicking", non-mandatory rules on tender offers. Finally, the paper briefly describes the regulation of hostile takeovers in Italy, and makes a positive assessment of it, in spite of its being much more pervasive than the model regulation outlined before; such positive assessment is based on the specificities of the Italian corporate governance system. 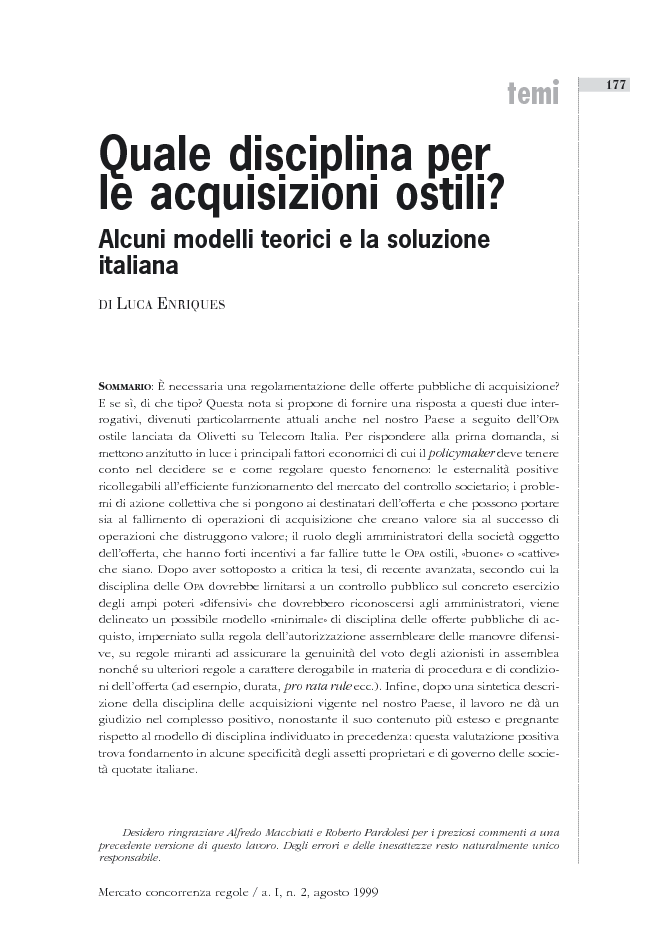