The two European agendas for the digital and the internal energy markets set roadmaps that are in many regards independent from one another, with very limited contact margins, which seem rather random overlaps. Yet, reality provides us numerous examples of gradual «convergence» between the digital and energy markets: for instance, the use of domotics to increase energy efficiency of buildings; the spread of smart distribution grids; or the development of the so-called «Internet of things». As happened many times in the past, technological-economic convergence may act as a driver for regulatory (and sometimes even institutional) convergence. In these notes, we aim to highlight the limits of existing regulatory and institutional frameworks which make only weak attempts to coordinate the two (energy and digital) agendas, in particular at the national level. Our thesis is that regulation should tackle not only the supply side (e.g. fostering investments in high-speed telecom networks and smart energy grids; subsidising innovation in services' supply, etc.) but also consumers, in order to stimulate the demand for smart services and applications. However, we contend that the type of consumer regulation should target, needs to be the «real» one, not a typological nor an automated one. Indeed, so far, the kind of consumer the energy and digital agendas have in mind is a rather unnatural, yet «hyper-connected» consumer. The «hyper-connected» consumer is someone that (re-)organises his/her life around electronic devices and smart applications made available by operators in the digital and energy markets. «Hyper-connection» is thus the use of technology as a «prosthesis» of human action. For example: in a near future, smart devices could be used to switch off electric appliances when electricity prices are higher during the day, thus saving money to consumers while making them behave in ways that are far from «real». Thus, «hyper-connected» consumers also become hyper-efficient in their consumption of energy and digital services. However, although they adopt decisions that are efficient in economic terms, such choices do not reflect the way humans naturally behave. «Real» consumers, as cognitive sciences teach us, are far from rational and welfare self-maximizers: rather, their decisions are often biased, mechanical and conditioned by social norms and emotions. In the conclusion, we argue in favour of a greater convergence of energy and the digital agendas, but warn regulators about the risks of «hyper-connection». 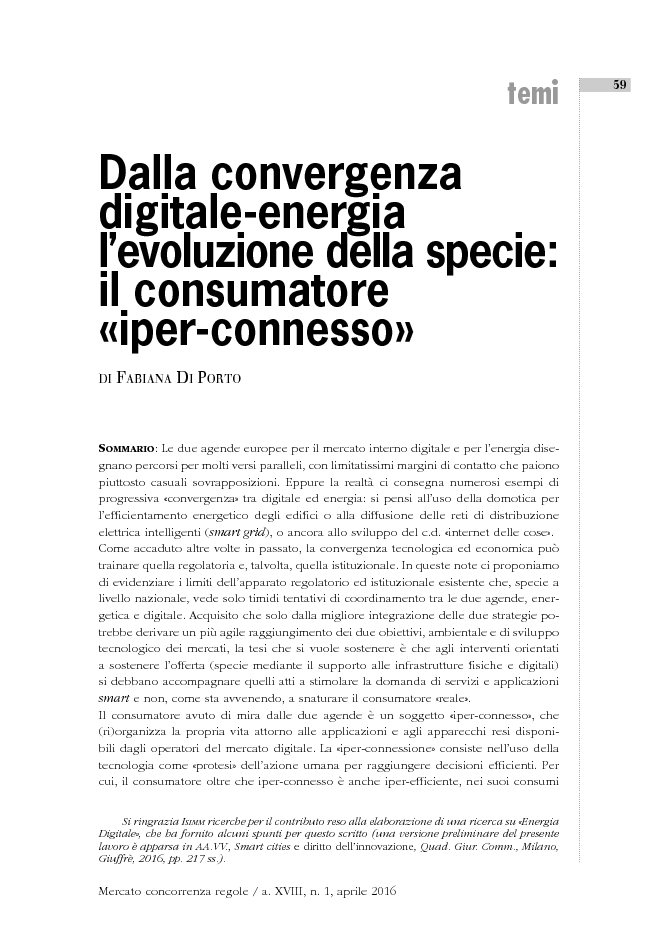