The essay analyses the contents of sentence no. 13/2019, by which the Constitutional Court, for the first time, ruled on the AGCM legitimacy to raise a question of constitutionality. The negative judgment of the Court is considered in light of the different perspectives, in favour or against the AGCM access to the Constitutional Judge, developed by the doctrine, as further examined following the publication of Ordinance no. 1/2018. The essay traces the evolution of the case-law concerning the subjective and objective requirements needed for the recognition of the power of action, also through the analysis of some peculiar notions such as the judge «for limited purposes», the «free zones» and the «shadow zones». While scanning the reasons underlying the decision of inadmissibility, the categories of independence, neutrality and impartiality (comparable to that of a judicial body) are examined, with particular regard on the latter requirement, the absence of which within the Authority has assumed a decisive weight in the final ruling. Finally, the procedural aspects considered to hinder the legitimacy of the AGCM are treated, with specific reference to the recognised lack of a clear separation between the Offices and the Board, as well as to the inadequacy of the «vertical» debate. Even if negative, this decision calls for some important theoretical and organisational reflections on the prerogatives and mechanisms of the internal functioning of the AGCM, also from a "de jure condendo" point of view. 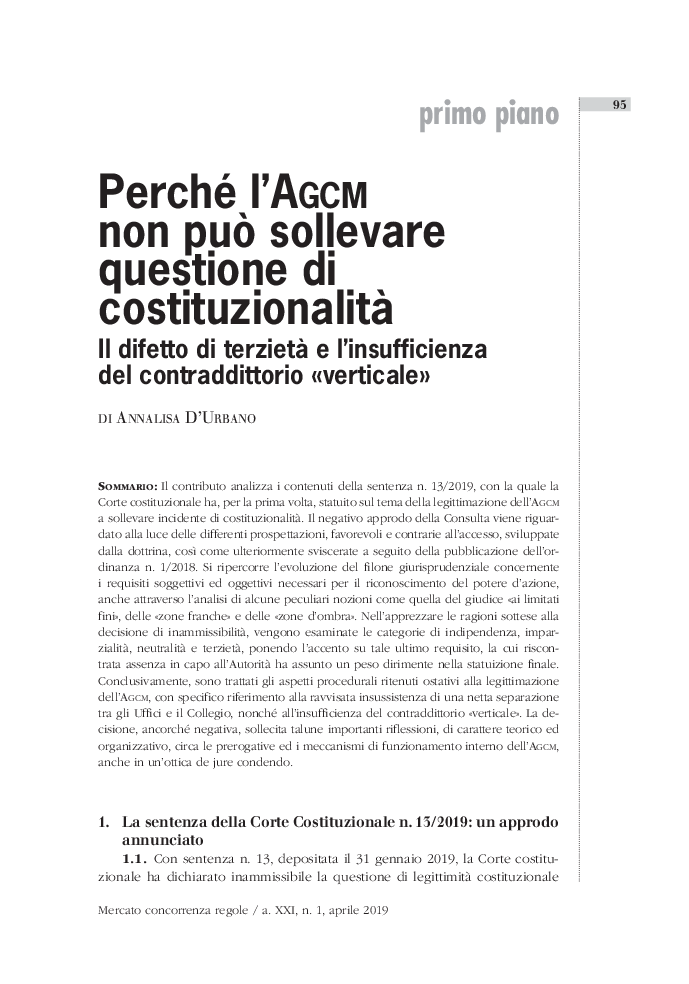