Law and literature are connected in different ways, but most recently as law in the literature as one of its basic subjects. Law indeed is a permanent topic for literary work. Most eminently it is central for the narrative of two greatest novelists of Nineteenth century: Honoré de Balzac and Charles Dickens. Both these authors were educated as lawyers and had a first-hand knowledge of the law of their respective countries, French civil code and British common law fundamentally, that somehow haunted them. So that law and lawyers are a recurrent subject of their stories. Their novels are full of lawyers, judges, attorneys, barristers, solicitors, notaries, whose character is presented as mostly dubious, when not openly corrupted. This is more evident in Dickens’s work, where law often takes the shape of sheer despair. Less pessimist seems to be Balzac, whose advocates are sometimes pictured as civic heroes, defenders of the weak and oppressed, though they more often than not contribute to build those traps which through law are meant to enrich the already rich and to empower the already powerful. The idea of law as progress might thus be turned into its dark opposite, a practice of dissipating hopes. The claim of progress that one could mean to see embedded in the very practice of law, in the legal decision as projection into a future considered as normative step forward, once not satisfied or not acknowledged, would render law a regressive and violent experience. This could be elaborated as a plausible reading of Balzac’s and Dickens’s many pages about law, lawyers and suitors. 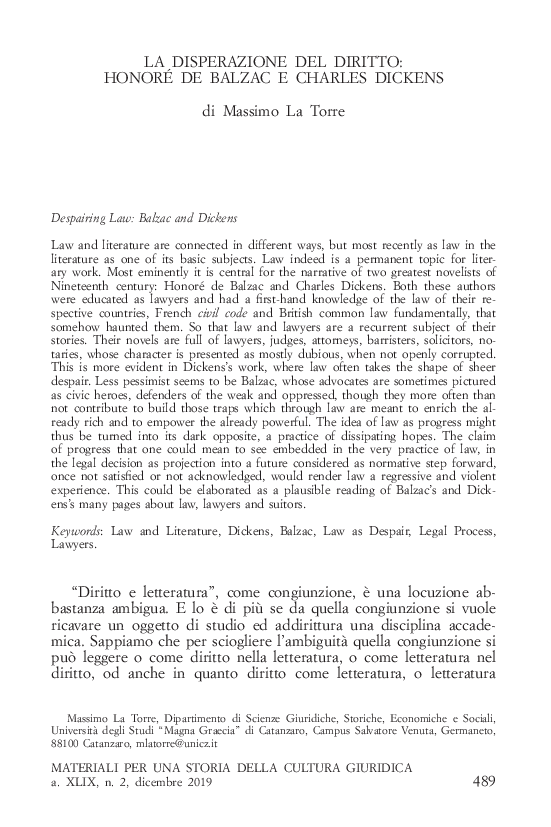