The aim of this article is to reconstruct the thought expressed by Benedict XVI in the encyclical "Caritas in Veritate", including by reading it with the eyes of the constitutionalist. In particular, an attempt has been made to understand whether the papal message theorises a new form of "potestos indirecta in temporalibus" or instead only wants to claim as vigorously as possible the 'right of preaching and conversion'. Next, an attempt is made to illustrate the thought of Benedict XVI by pointing out any themes with points of friction with the principle of laicity. Here a distinction is made between the claim of truth that is also public and the claim of privileges. On the one hand, the claim that one's truth be recognised as such by interlocutors, "in interiore nomine", with all the subsequent repercussions on the content of legislation that may stem from this recognition (within constitutional limits); on the other hand, the claim that positions of privilege derive from such recognition: i.e. that the position of one or more of the 'bearers' of claims of truth be placed in an institutional position of supremacy vis-à-vis others. The investigation proceeds to follow the red thread of the ambiguity of the thought of Benedict XVI: Is it characterised just by a claim of truth (by a claim of the right to preach and to convert) or does it also contain a claim of a position of privilege of the Church? Does the claim of truth also extend to the content of the 'social doctrine' enunciated? If so, in what way does such claim stem from its theoretical and epistemological framework? In short, this entails clarifying whether the reflections of Benedict XVI place Church intervention on the same plane as that of other cultural, social or political actors or instead lead to a perceived need for different treatment. Given this conceptual framework of reference, the first part of the article attempts to understand how, beginning from "Rerum Novarum" and "Populorum Progressio", "Caritas in Veritate" has redefined the social doctrine of the Church. This operation is conducted by considering three different analytical planes: the justification of the theological foundations of the Church's social doctrine; the claim of the right of the Church to proclaim this doctrine as its own; the claim of the rational nature of such doctrine and the legitimacy of public intervention by the Church to orient human development. The second part of the article instead focuses on the idea that in order for a human being to be fully developed as a person, he/she must live in a society founded on shared values that are not transient but universal and stable. For Benedict XVI this result can be achieved only by holding that the foundation of human rights and brotherliness originates from a transcendental calling that gives meaning to collective action and that provides prior and further criteria in light of which to evaluate the modern world. Viewed thusly, the social doctrine of the Church becomes not a whole of pastoral and precautionary recommendations placed in a historical context, but the (sole) system of thought that, by joining faith, theology, metaphysics and science, can effectively found human societies. In the encyclical, recognition of the public role of the Church is also justified with reference to the cohesive social action promoted by religions and then immediately linked up with the reference to natural law, which, inasmuch as it is the common heritage of humanity, is universal moral law, with the consequence that adhesion to it is the indispensable presupposition for any form of social collaboration, and the Christian faith is an aid to universal growth and development marked by solidarity. Moreover, the article does not fail to underline the problematic nature of this reconstruction, among other things stemming from the fact that Benedict XVI seems to be closer to the American model of civil religion, avoiding, however, complete acceptance of its religious pluralism. To conclude, the fulcrum of the Encyclical is identified as lying in the affirmation of the twofold justification of the public role of the Church: 1) a theoretical justification deriving from the union of faith and religion; 2) an accompanying practical reason founded on the idea of religion as an instrument for social cohesion. In this context the church's social doctrine presents itself as an indispensible instrument for authentic human development in its totality. Furthermore, such indispensability represents the problematic heart of the theory being examined, inasmuch as it contributes to creating some ambiguities with regard to the concept of universality as it emerges from the pope's reflections. There is in fact an irreducible difference among those who maintain that faith and reason express the truth monologically, those who do not maintain that there is a truth per se, and those who admit that there is a truth but that it can be expressed in different ways. The second and third outlook are both wholly compatible with pluralist democracy, with the difference that while one accepts the rules adopted from time to time by the majority, the other may claim that the action of the majority has some limits. The first vision instead, by bringing with it the demand for recognition of its own truth, can present problems of compatibility with pluralist democracy. Viewed against the fact that Italy's constitution wholly embodies the pluralist model, the article attempts to highlight that the acceptance of a component that it alone considers indispensible is problematic only if such attitude results in a claim for differentiated treatment. 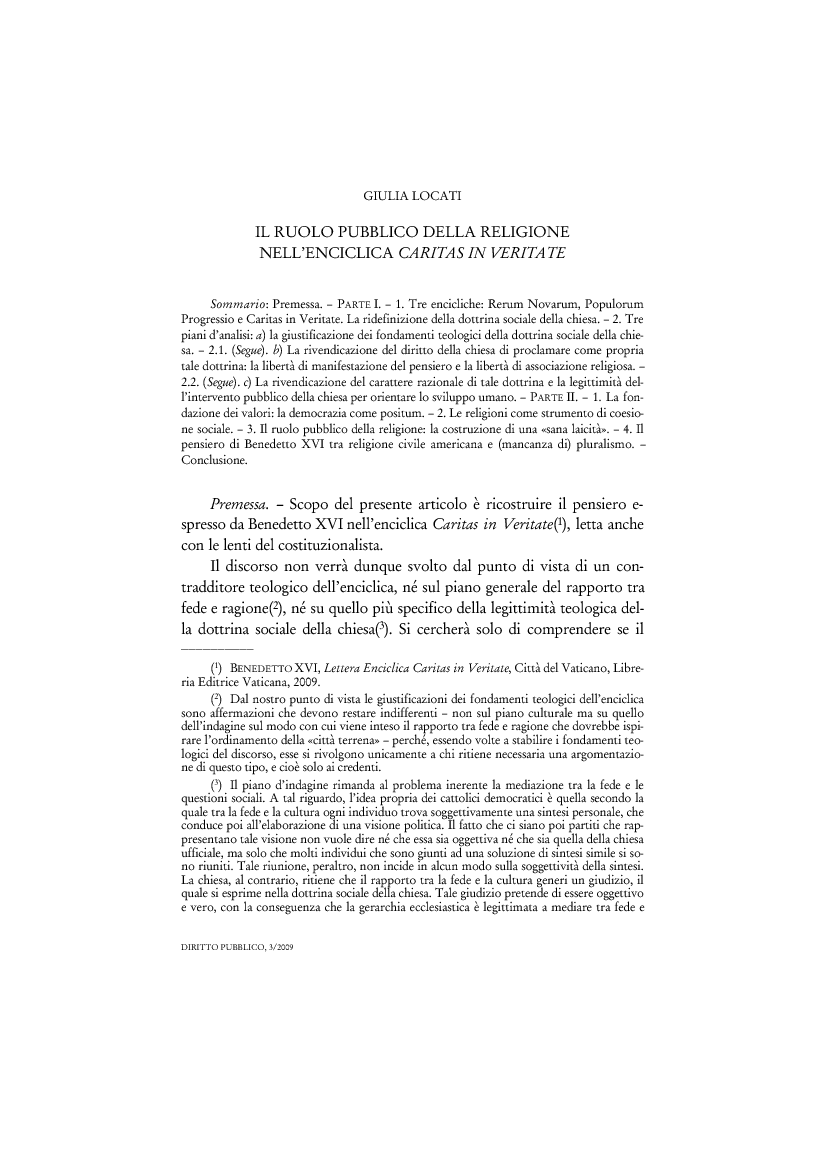