In Italy there is an anomaly in the law sources system: ministerial decrees are often enacted with regulative contents but without the regolamento [regulation] procedure. These atypical sources of law can be divided into two groups: the first one includes decrees with regulative contents provided by legislative acts that do not use the word regolamento and do not cite Art. 17 of Law 400/1988 (and enacted by the minister without complying with the procedure pursuant to Art. 17 of Law 400/1988); the second one includes decrees with regulative contents but explicitly defined 'not regulative' by the legislative act. Even after Constitutional Law 3/2001 (that shares out regulative power among territorial authorities - Art. 117(6) of the Constitution - and wants logically to refer to all secondary sources of law), ministerial decrees have to be qualified with substantial standards, so that, if they have general, abstract and innovative contents, they have to be considered as normative even without regolamento procedure (they are precisely 'atypical' secondary sources of law). That is what emerges from the constitutional jurisprudence: the analysis of several sentences handed down after 2001 confirms that the Constitutional Court utilizes substantial standards in qualifying decrees and this trend has to be shared because it allows subjecting the regulative act to an adequate treatment in relation to its nature, whereas the opposite solution would lead to the creation of a strange and dangerous 'hybrid', i.e. an act that is addressed to outside the government with binding power but without the guarantees connected with the 'regolamento' regime. Also, the analysis of the administrative jurisprudence confirms that substantial standards are utilized to distinguish normative acts from ministers' general administrative acts, for different purposes, among which that of controlling the violation of Art. 17 of Law 400/1988, which has been considered as binding also in relation to ministerial decrees that are not called regolamenti, if the law on which the decree is based does not derogate expressly from it. The second case (decrees with regulative contents but explicitly defined 'not regulative' by the legislative act) is more problematical because the regulative contents clash not only with the procedure (that is not the 'regolamento' one) but also with the 'self-qualification' of the legislator. The paper examines the constitutional jurisprudence and the possible treatments of these decrees. 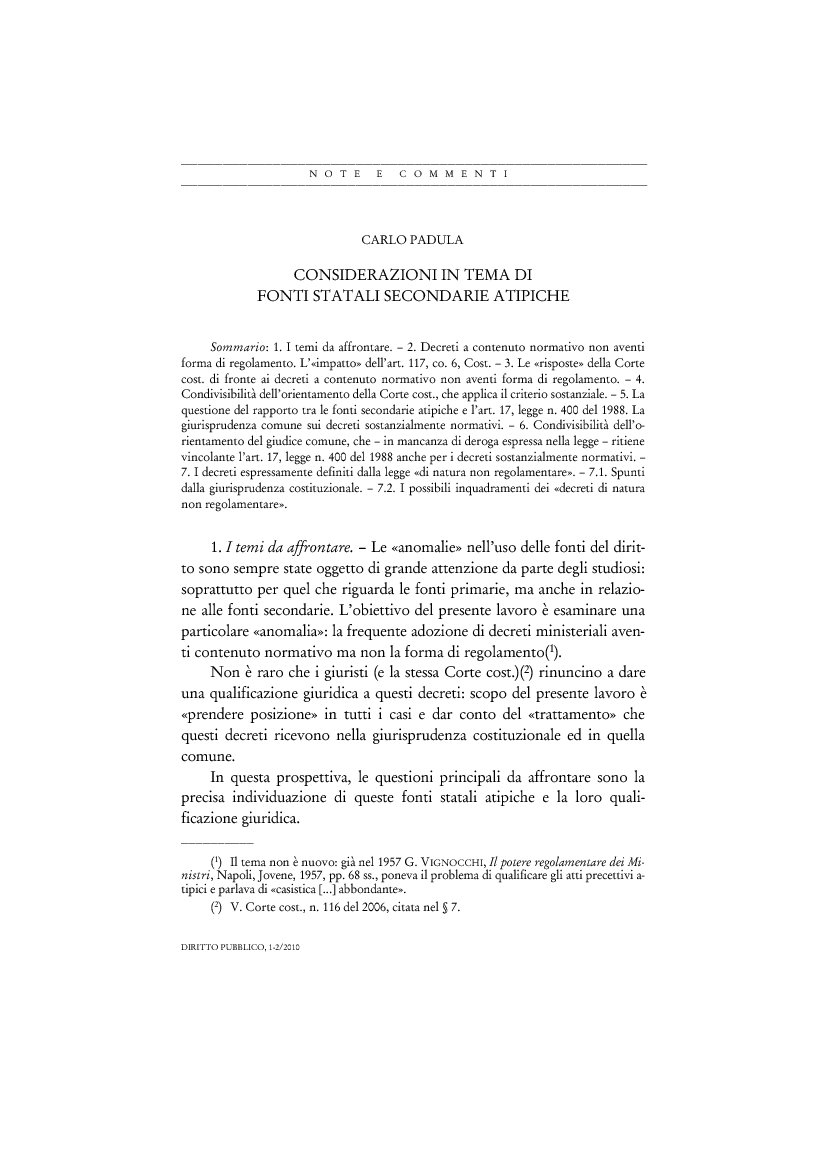