The writing is inspired by the chain of events that culminated in Sentence No. 13/2012 of the Constitutional Court, which involved an attempt by voters to use the tool of the abrogative referendum to reinstate the electoral laws of 1993 governing election to the Chamber of Deputies and Senate in place of Law No. 270/2005 currently in force. The attempt met with a negative response on the part of the Constitutional Court, which declared both of the proposed referenda inadmissible. Since the intention of the proponents was based on the thesis holding that the abrogation of Law No. 270/2005 would reinstate the previous provisions contained in the electoral laws of 1993 abrogated by Law No. 270/2005, the commentary is broken down into three parts: 1) a necessary clarification of the socalled reinstatement of laws or provisions of law; 2) an assessment of the proposals contained in the referenda and therefore an assessment of the Court's decision; 3) an alternative hypothesis with regard to the sentence. The alternative hypothesis rests on the following line of reasoning: 1) there is no doubt that the abrogative referendum is an expression of the principal of popular sovereignty; 2) there would be no grounds for maintaining that in the judgement concerning the admissibility of a referendum the principle of the balancing of any conflicting constitutional principles and values need not apply, since wholly applying one to the exclusion of the other would involve sacrificing the latter; 3) in balancing two or more principles in such a way as to reconcile insofar as possible all those involved in the balancing, one of the obvious criteria is to inflict the least possible sacrifice on the one (or ones) partially sacrificed; 4) to declare an abrogative referendum inadmissible in the name of an unwritten constitutional principle or value, in addition to what Art. 75 has already provided for, certainly sacrifices the principle of popular sovereignty; 5) it is therefore necessary to verify whether this sacrifice of popular sovereignty can be reduced to a minimum; 6) the unwritten principle that was invoked by the Court to deny the admissibility of an abrogative referendum concerning electoral laws of constitutionally-required organs lies precisely in the need for the existence of such organs not to be jeopardized by the non-existence of an electoral law allowing their election; 7) if this is the constitutional principle underlying the Court's decision, it can be completely satisfied if, given the abrogative referendum that we are discussing, assuming a result in favour of the abrogation of the electoral law and the incapacity of Parliament to approve a new electoral law in time, the Constitutional Court, in declaring the admissibility of the referendum simultaneously in the purview, in name of the written principle in the Constitution establishing popular sovereignty, rules that the previous electoral law shall temporarily be in force while awaiting the new electoral law. From the technical standpoint what would be involved is a sentence of admissibility 'inasmuch' as it would succeed in balancing the two constitutional principles involved, the one written in the Constitution of popular sovereignty and the one pronounced by the Court (but in any case drawn from constitutional principles) according to which it is inadmissible for there not to be an electoral law in force pertaining to required constitutional organs. 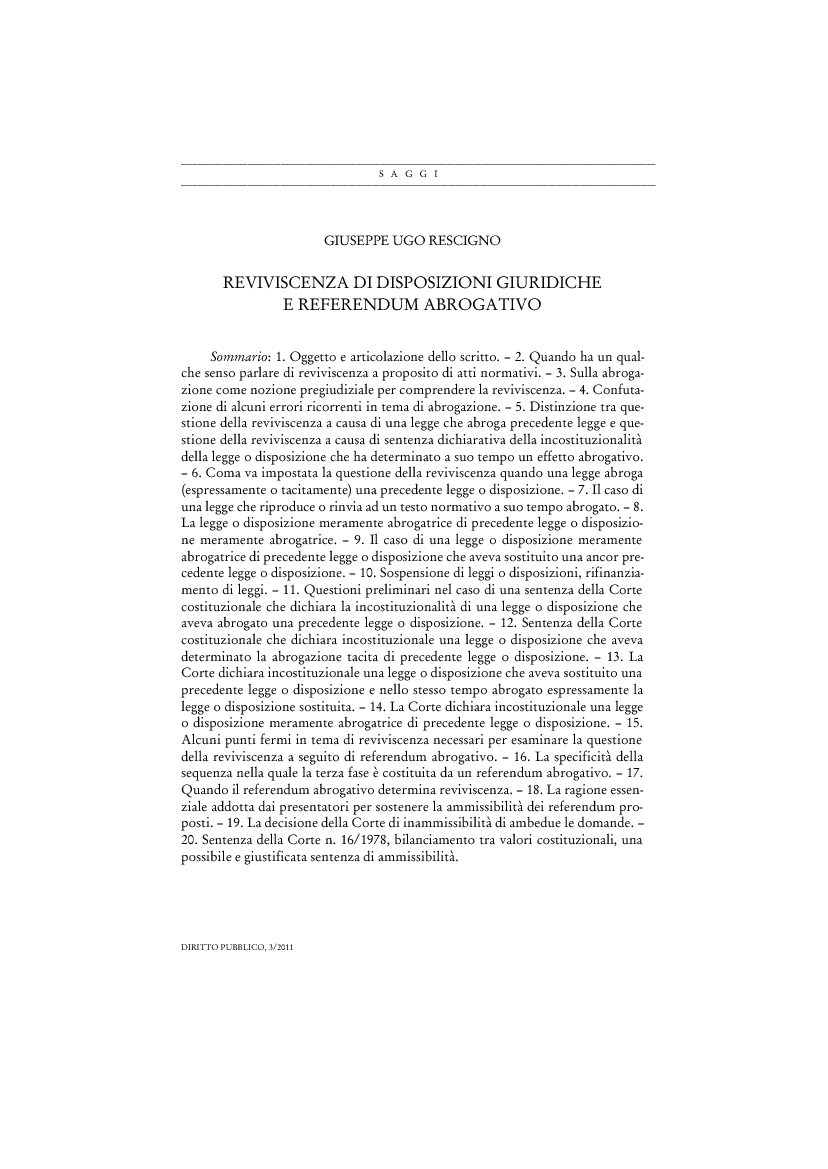