The author opens his treatment of the theme of the creation of a European constitution with the observation that the presuppositions the presence of which in a particular historic moment gives rise to a constitution are two in number: the emergence of a constituent authority and the maximum activation of the subjective nature of a demos. Since the birth of a constitution cannot but have a clear denotation, it therefore can be more exactly stated that the presuppositions for its coming into being are a constituent authority and a people who gain consciousness of their existence as a subject and as the maker of their own history. In the process of developing this idea the author poses the question of what constitutionalists ought to ask, convinced as they are that the connection between constituent authority and demos symbolises a non-negotiable victory of civilisation, and also convinced that a prescriptive conception of the constitution, in recognising the significance of a turning point in the history of law and politics, expresses an conquest of contemporary ethics?What ought to such constitutionlists instead propose concerning the recurrent and debilitating exercise of a sort of institutional engineering forced to invent ever-precarious solutions for institutions, either without a State or with too many States?The author responds by observing that for a start one might ask to try for less vagueness (and less rhetoric) and to give a perceptible content and plausible meaning to expressions of the "federation of nation states" type, which add nothing to and subtract nothing from the subjects called upon to be a part thereof and which are already nation states, and have been for centuries. Exalted as a solution to conflicts, to contradictions and to problems of great depth, the above expression in reality is used to evade the underlying problem: namely, whether the federation ought or ought not to be a State. After having indicated the presuppositions and the object of a constitution, and after having attempted to imagine how it might be possible to try to achieve, in the regards of a European constitution, results corresponding to everything that has been elaborated by constitutional theory and in conformity with some credible notion of democracy, the author makes clear - from the perspective of a constitutionalist stubbornly obedient to the deontology he professes - the terms of the open, unresolved questions and reveals the ambiguities, the mystification and the lexical and logical forcing present in the institutional process currently underway. 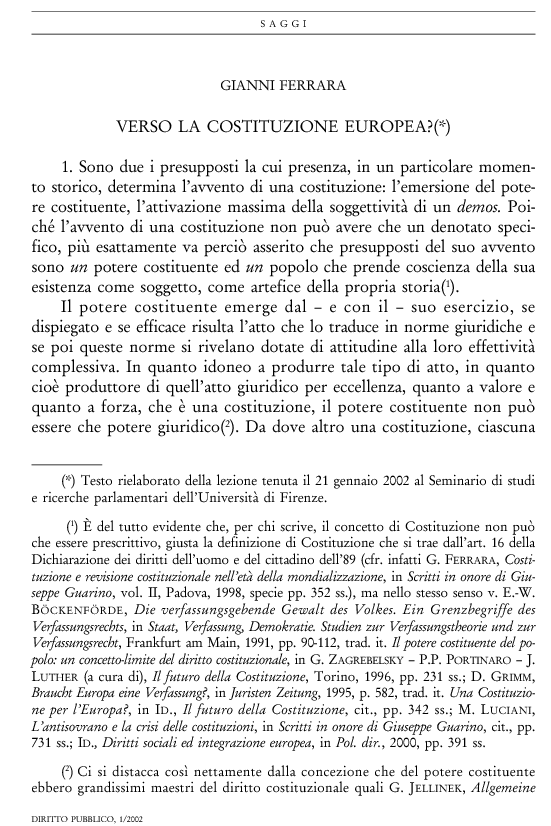