The reform of Title V, Section II of the Constitution effected by the laws known as l.cost. 1/1999 and l.cost. 3/2001 has brought about a profound change in the regulatory power of the Regions, which previously was rarely used. From the standpoint of an appreciable upgrading of regional regulations, the reform process concerned both the identification of the competent organ and the definition of the matters within the province thereof. Nevertheless, the two above-mentioned constitutional laws present highly problematic aspects. For example, as regards the holder of regulatory power, Art. 1 of l.cost. 1/1999 limits itself to removing it from the Regional Councils without further specification, so that it is not clear if such cancellation has entailed the transfer of regulatory power to the Regional Committee ("Giunta") or instead only causes regulatory power to no longer belong exclusively to the Regional Council, with a consequent freedom for future regional statutes to dispose of the matter. As regards the identification of the subject matter, Art. 117, par. 6 of the Constitution, as revised by l.cost. 3/2001, reserves regulatory power to the State in matters of exclusive legislative power, while in all other matters it is left up to the Regions; the holding of national and regional regulatory power is, then, limited by the recognition of the regulatory power of local government institutions. One of the most serious problems raised by the provision is tied to the radical reduction of the regulatory power of the State, which risks producing problems in terms of application that are hardly indifferent. A second major problem lies in the fact that the provision for regional regulatory power delegated by the State in matters of its exclusive legislative power is wholly indeterminate. Finally, the discipline of the relationship between the regional secondary sources and the regulations of the local government institutions in relation to the discipline of the organisation and exercise of the functions assigned to them remains a complete enigma. 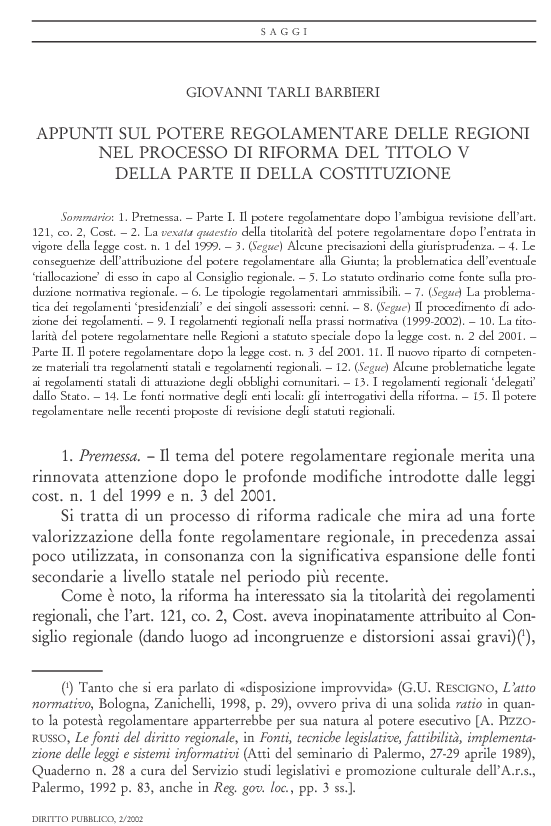