The work analyzes the ways in which the current Italian system relates in actual fact with supranational and international systems in the matter of the protection of rights, doing so by illustrating five distinguishing features: a) international openness declared and practiced: the Italian system declares in the Constitution of 1948 and then actually has and does practice, above all in the field of the protection of rights, a real openness outwards, manifesting the utmost willingness to allow itself to be permeated, influenced and reshaped by outside stimuli; b) formal parity of extra-national norms but different treatment in actual fact depending on their content: the constitutional precepts lay down no formal distinction - regarding either the procedure of formation or the ranking and effects - between rules of international origin in the matter of human rights and other international standards. But against this formal parity, the treatment that in actual fact is reserved for external norms in the matter of rights is constantly different with respect to that reserved to other international obligations; c) Italian pride: along with an attitude of sincere openness outwards, at the same time the Italian system expresses a tension in some ways contrary, which takes different forms, stemming from an awareness of the value of its own cultural tradition and of the level attained of the domestic constitutional protection of rights, which it does not intend to give up under outside pressure; d) teamwork between the Constitutional Court and supreme magistratures: openness to rights of international and supranational origin is realized jointly by the Constitutional Court, which lays down the criteria and the conditions to which the openness is subject, and by ordinary judges, and in particular by the supreme, ordinary and administrative magistratures, which adhere to the criteria established by the Constitutional Court in the single cases in point and eventually develop them, even creatively, in the same direction already traced out by the Constitutional Court; e) consistent interpretation as the 'hinge' between norms and systems: Italian jurisprudence intensely practices this technique, which is proving to be the safety valve for the tensions between norms and between systems, and therefore an indispensible instrument for avoiding conflict when possible. It emerges from a mere reading of the list that the theme forming the object of this contribution, in all five of its facets, is one of the most explored by Italian doctrine, constitutional and otherwise, and is also one of the most controversial. And, above all, it is the terrain where in recent years Italian jurisprudence - civil, criminal, administrative and constitutional - has been constantly put to the test, thrown into the front line so to speak, to resolve problems of coordination between systems and jurisprudences previously unimaginable. 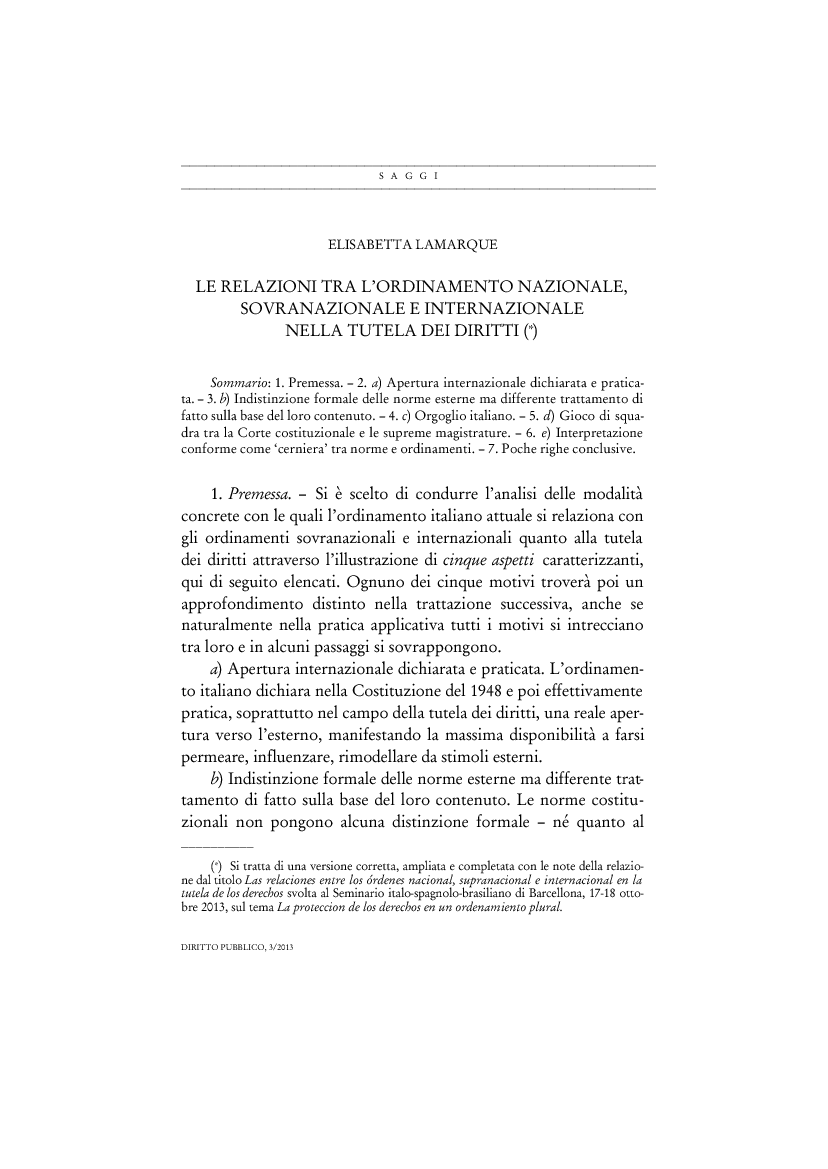