The new constitutional text of Title V, Part II of the Constitution has profoundly altered the institutional status of the levels of government; no longer is it a matter of the mere decentralisation of powers for subjects whose autonomy derives from the State, but full institutional equality with powerful direct guarantees of autonomy for subjects that are defined as constituent elements of the Republic (Art. 114 of the Constitution). Likewise transformed by the new text is the system of intergovernmental links: from subordinate participation in the exercise of powers mostly reserved to the central government (or subject to being reserved to it in the name of the national interest) to "loyal republican collaboration" among subjects holding powers of their own not subject to centralisation by the State. The forms of linkage that have been introduced to date, as compared with the previous constitutional arrangement, are no longer compatible with the new arrangement. An increasing number of objects of linkage exist (the division of competencies, the identification of and attendance to "common" interests) for which the unanimous agreement of the interested subjects is necessary in order to avoid potential conflicts. Then there are cases where the State, as holder of a significant though limited number of powers to attend to unitary interests, must be able to make these prevail over any eventual conflicting interests of the autonomous territorial units. However, even in such cases transparent procedures need to be provided for based upon prior participation of the interested governments. The new constitutional text does not appear to be aware of these institutional repercussions and is devoid of any indication, even if only in principle, concerning loyal collaboration. What is missing in particular as a Chamber of Regions, whose introduction in the system would mark an effective turning point in the whole arrangement of intergovernmental relations. In this situation there is a high risk of "business as usual" with the resigned continuation of seats, instruments and organs for linkage designed to serve the old system of relations. What thus turns out to be indispensable is a new organic discipline for loyal collaboration, including by means of a State law, but resting upon a broad consensus on the part of the various levels of government constituting the new Republic. To this end it is necessary to look to the experiences of countries with a federal form of government and to those of the European Union where the powerful institutional status of the subjects constituting the system is accompanied by an equally powerful exigency to guarantee that unitary interests will effectively be attended to. 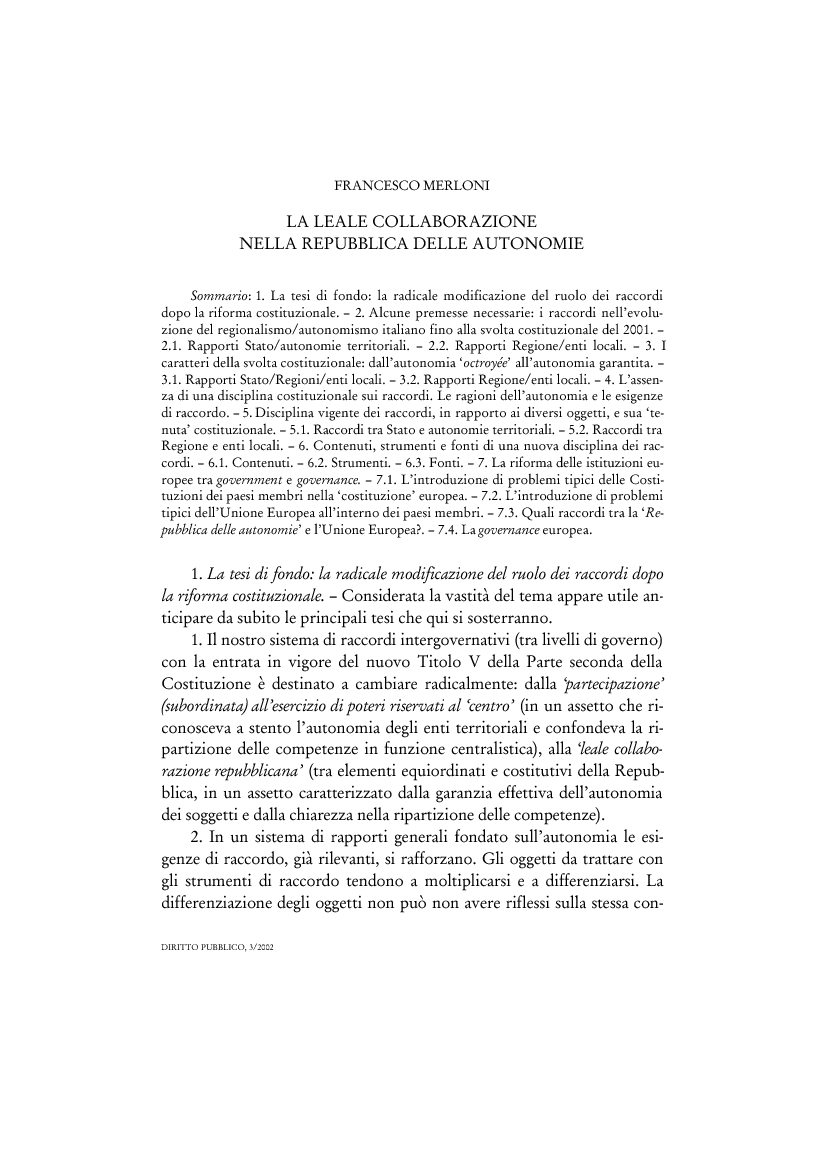