The author analyses the problems of Italian justice by sketching the historical and juridical context within which the judicial branch took shape in Italy. His starting point is an analysis of Art. 68 of the Statuto albertino or the Statute granted in 1848 by Carlo Alberto, King of Sardinia, which designed a judicial branch inspired by two fundamental criteria: 1) a jurisdictional system with a vertical and hierarchical conformation; 2) a guarantee of the independence of magistrates for purposes of impartial, objective law enforcement. With the subsequent Orlando laws of 1907 and 1908 the idea began to take root that judicial independence remains purely abstract in the absence of a complex of rules and organs designed to effectively free the judge from the bonds of hierarchy inevitably restrictive of his (or her) exercise of free will as an impartial interpreter of the law. The Fascist regime marked a profound set-back in this process with a return to a hierarchical structure of the judiciary system: the fragile barrier of juridical formalism was incapable of curbing the pervasiveness of a regime that progressively emptied the Statute of content and replaced it with an increasing dose of subjectivity and voluntary action made even more efficacious by the unification of the centres of power. The moderate separation of powers under the Statute gave way to an identification of political leadership at one with the enforcement of the norms, which left no room for independent jurisdiction. The interruption of this regression came about with the taking effect of the 1948 Constitution, which effectively releases the judicial branch from subjection to political power and lays the groundwork for the exercise of a brand of jurisdiction inspired by the principles of legality and equality without any possible institutional influence on the action of magistrates, whether in passing judgement or bringing bills if indictment. The focal point of the new constitutional arrangement was the creation of an organ to provide guarantees: the Consiglio superiore della magistratura or C.s.m., intended to "sterilise" all provisions regarding the status of magistrates having the potential to corrupt or intimidate. After having retraced the steps leading to the complete fulfilment of the constitutional arrangement and having pointed out the necessity of identifying forms imposing greater accountability on magistrates, the author takes up the current matter of the government-sponsored bill for the reform of the judicial branch, identifying a common tendency found in the diverse norms in the reintroduction of forms of verticalisation wholly incompatible with model provided by the Constitution, which, should the bill become law, would mark the return to a preconstitutional model of magistracy organised in pyramid form and with a great capacity for internal homologation assured by the Court of Cassation returned to its former role as the supreme national authority of the judicial branch, which would be in addition to, and overlap with its role as the supreme judge of legitimacy. 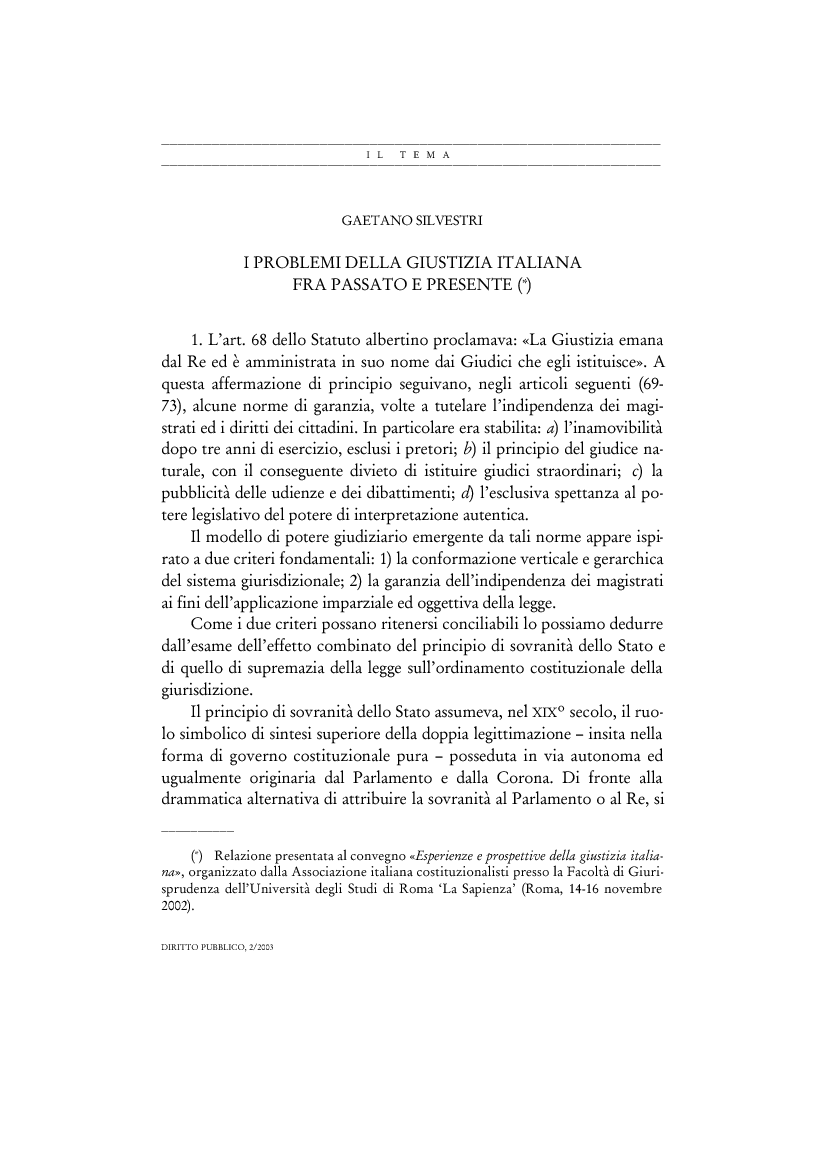