The book collects the proceedings of a conference held on 4 May 2001 at the University of Pavia on the legal thought of Umberto Potoschnig, the eminent scholar of administrative science for many years professor of administrative law and dean of the law faculty at Pavia. The essays explore every aspect of Potoschnig's work from a variety of standpoints, furnishing thorough analysis of all the fields of inquiry addressed by the scholar. Piero Aimo's study examines Pototschnig's thought from a historical-institutional point of view, analysing historical issues regarding the development - from the Middle Ages until the present day - of the legal and administrative institutions. Valerio Onida reviews Pototschnig's analyses of the Constitution and constitutional issues recurrent in various forms in his legal output. The scholar is viewed as an interpreter of the Constitution, in the sense that he gave laws a meaning more consonant with the constitutional text, but also as a "constitutional" practitioner: a lawyer involved in numerous rulings on disputes before the Constitutional Court and the drafter of legislative texts implementing the Constitution. Elio Casetta highlights Pototschnig's contribution to the system of administrative law. The essay stresses his tendency to concentrate on neglected areas of inquiry, relating them to the juridical dimension. Reference is thus made to his studies on public works, his reflections on the environment, and his perception of regional and autonomous institutions, where his analysis is not restricted to description but sets out possible models for development. Leopoldo Mazzarolli shows that Pototschnig's numerous works on administrative procedure invariably give priority to citizens and their rights with regard to the public administration. Giorgio Pastori reminds us that Pototschnig was a jurist who made a decisive contribution which was not only analytical but propositive of the profound changes made to the statutes of the regions and the autonomous provinces, an area in which he was the protagonist of two principal initiatives: the drafting of the bill on local administration and the editing of the journal "Le Regioni" from 1978 to 1994. Giuseppe Morbidelli's paper analyses Pototschnig's contribution to what he calls "government of the territory": coordination of studies for his book on expropriation for public purposes, the development of framework of rules on urban planning (also regional), and his studies on admiralty law. Domenico Sorace focuses on the book published by Pototschnig in 1964 on the public services, in which he sought to formulate a new theory based on article 43 of the Constitution. Finally, Aldo Travi provides a memoir on Pototschnig the university teacher which once again emphasies his conviction - forcefully imparted to his students - that the rationale of administrative law lies in its commitment to the "human person". 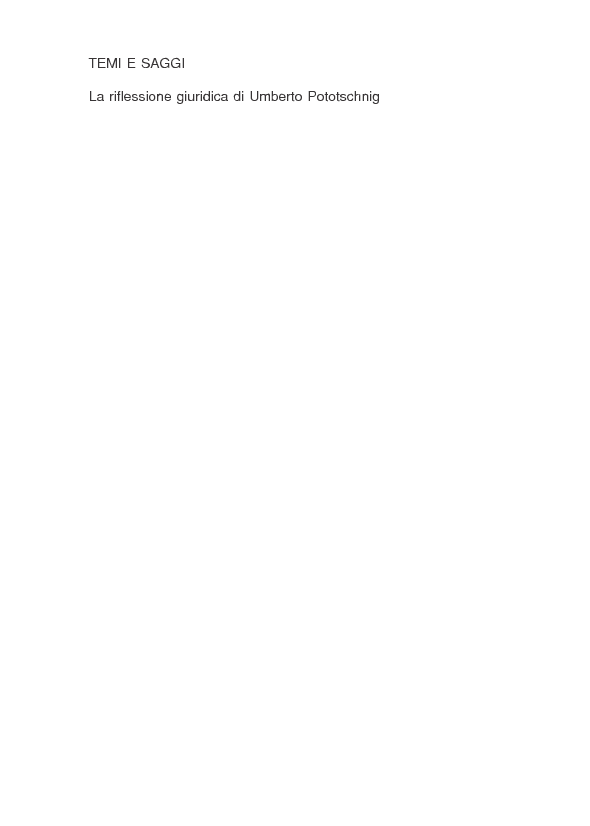