The study of the evolution of the administrative justice in the twenty years of fascism in Italy is traditionally underlined for to the 'invention' of the exclusive jurisdiction, which represents, in the opinion of the scholars, the qualifying trait of this historical moment. This contribution, starting from the affirmation of the relevance of such a moment in the evolution of the Italian model of administrative justice, is aimed to analyze more deeply the 'legacy' of the fascism with respect to the mentioned evolution. In doing so it highlights two other traits that characterized the administrative justice in the period from 1923 to 1943 and which can be framed by referring: on one hand, to the weakening of the guarantee of the judicial review and, on the other hand, to the contribution offered to the 'construction' of a new notion of excess power. The first profile makes it possible to refer to a 'story' that has often been forgotten or strongly criticized, above all in the manuals dealing with the administrative justice after the fall of the regime. The reference is to the limitation of the administrative jurisdiction which has to be studied in two different perspectives. On one hand, looking at the exclusion at the root of the jurisdictional control of some administrative decisions, above all in the case of political acts and in that one of particular categories of acts (especially in the field of economic intervention) with respect to which the legislator has ruled out any possible form of control by the administrative judge. On the other hand, referring to the limitation of the causes of jurisdictional control on administrative decisions. In this perspective the appeal was allowed, but with a limitation of the deductible defect only to the violation of the law or to the excess of power. The second profile concerns the 'creation' by the scholars of this period of a new dimension for the study of the vice of excess of power. From this different point of view the 'legacy' of the fascism is due to the definition of such a vice, above all in relation to some 'symptoms' (the so-called symptomatic figures) that represent the outward manifestation of a pathological state of the act that can be reconstructed on the basis of a presumptive logic. In this way and in a more articulated perspective, the paper defines a framework that allows to understand the state of the art of the administrative justice in the years immediately preceding the coming of the Italian constitution. 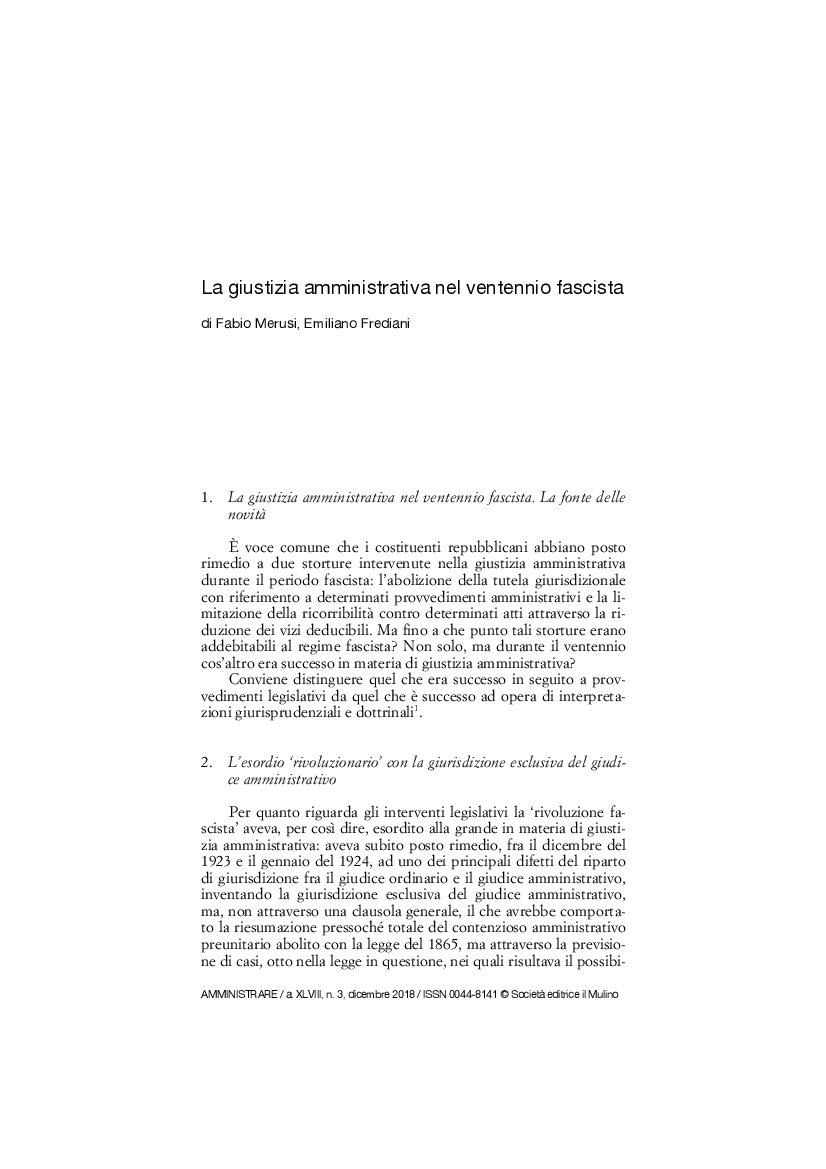