It was during the golden age of Italian cinema, those years full of hopes and dreams, after the boom of postwar Reconstruction and before the rise of social protest in 1968, that the myth of Italian style was born. During this period, Italy strove to rid itself of the bitter legacy of the past, to turn instead toward a better future where it would take its place among the world's most powerful countries. Emerging during this era of seemingly miraculous economic growth was a new modern image of Italy, well expressed by the alluring automotive designs crafted by Carrozzeria Pininfarina, the coach building firm that became one of the world's leading automobile designers. Pininfarina helped to define and create this new Italian style, uniquely blending formal beauty, manufacturing quality and technological innovation. Spreading this new style around the globe, the era's iconic Italian-built sports cars were featured in numerous films, many now established as classics or cult-favorites. In these films, the aesthetic of beauty and speed celebrated in the sport car captures the spirit of that unique era, and the cars themselves became proof of the new Italian identity, expressed in elegance, craftsmanship, creativity and genius. Thanks to the designers of the era's Italian sport scars, the compelling traits of a new beguiling Italy raced around the world. Audiences were entranced and moved by the nation's new-born vitality. Film provided the ideal medium to express Italy's new modern style, allowing audiences worldwide to fantasize about themselves behind the wheel of these cutting-edge vehicles that stunningly combined design and performance, fueling their imaginations with the curves and grace of cars, like the Alfa Romeo Spider named «Graduate» in honor of Mike Nichol's 1967 film. 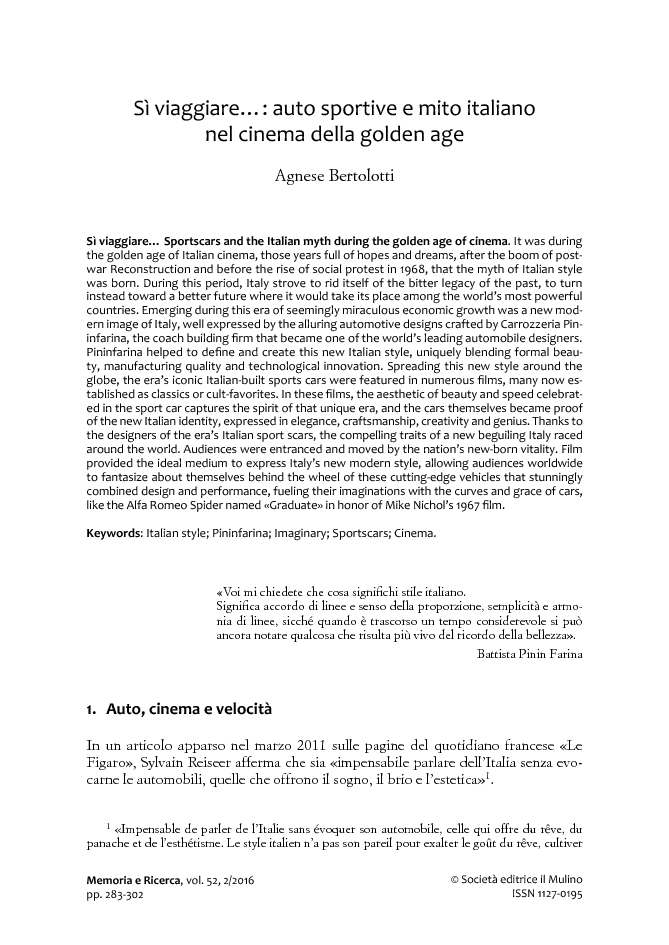