It was the 9th of November 1993 - the fourth anniversary of the fall of the Berlin Wall - when a camera filmed the breakdown of the famous Mostar's Old Bridge (Stari Most). On that afternoon, the cannons shooting from a hill controlled by Bosnian Croat Forces hit not only an artistic and historical handwork: they destroyed a symbol, radically changing, once and forever, its meaning. In 2004, on July 23, the new Stari Most was inaugurated in Mostar, reconstructed thanks to the efforts of a remarkable number of international donors, including Croatia. Two years later, in 2005, on November 26, another monument was inaugurated in the former «Lovers Park» in Mostar. This time it was a new one; and it carried on many different symbolic meanings: the Bruce Lee statue! It was the provocation (absurd, brilliant, desperate...) of a group of young local activists: the way they fighted against the nationalization of every corner of their city. How far can change the urban space in a place divided by war? Which are the mechanisms of separation and inclusion in the town? What significance has acquired the Stari most, and how it is perceived by residents and tourists who visited every year the bridge? This work analyses the transformation of the urban public space, and the trends towards social, political and cultural integration and separation of Mostar from the middle 1990s until nowadays. The focus of the research is on the postwar processes of division and unification of the city and their traces and evidences in the public space and in the urban socialization mechanisms. The field of study, the instrument for analyze this processes is the Old Bridge, from its destruction to its reconstruction, till to its current perception. 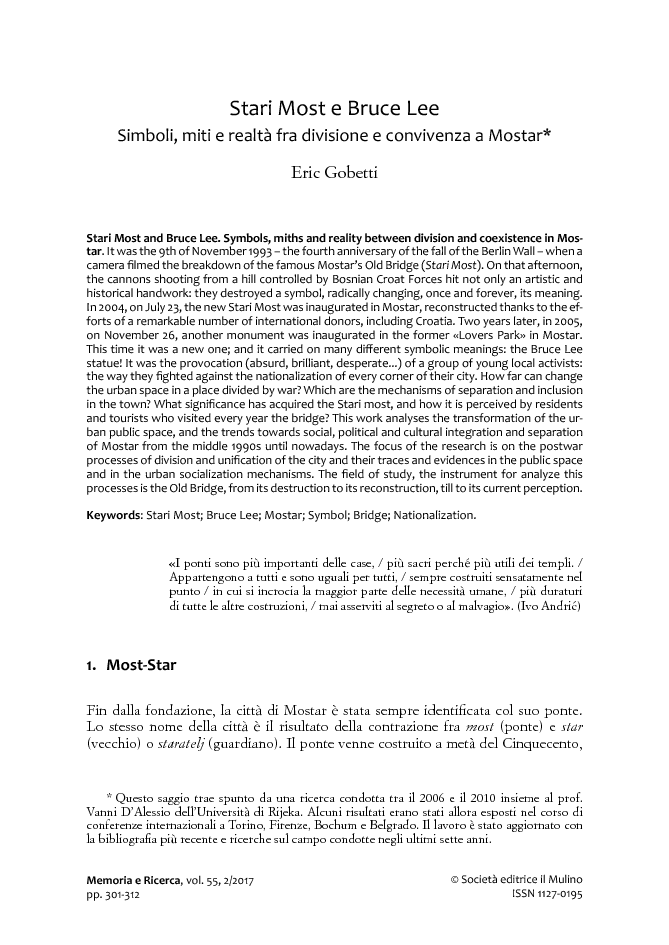