Although widely known as the so-called anni di piombo, the threat by terrorism in the 1970s was not a genuine Italian phenomenon. In the same time, other European states were struggling with subversive groups from diverse backgrounds; and slowly the mutual interest in the events abroad turned into consultations and reciprocal aid. Apart from West Germany, the United Kingdom was a highly important partner for Italy in these years. Overall, the fight against political left- and right-wing terrorism in Italy was perceived as largely different from the fight against nationalist terrorism in Northern Ireland. Nonetheless, the United Kingdom became an increasingly important partner, when the Italian counterterrorism approach evolved from a rather narrow public order policing towards a proper strategy against terrorism, including cooperation with other states. In this essay1, I will sketch the Italian-British relations regarding the common fight against terrorism during the decade 1972-1982. With a chronological approach, I trace the British perception of political violence in Italy and the correspondence between actors of both countries. Herein, I focus on concrete cooperation regarding problems of public order and terrorism. In the analysis, I concentrate on transfers of knowledge and techniques in counterterrorism, and on the relations between the involved actors. Although official communication occurs between offices and institutions, human characteristics of the signers must be considered in the analysis. The four British and twelve Italian governments included diverse personalities. Two cultures «clashed» at times over their diverse views on statehood and violence. Stereotypes shaped mutual estimations, and heritage from political history could have an impact on political representations. 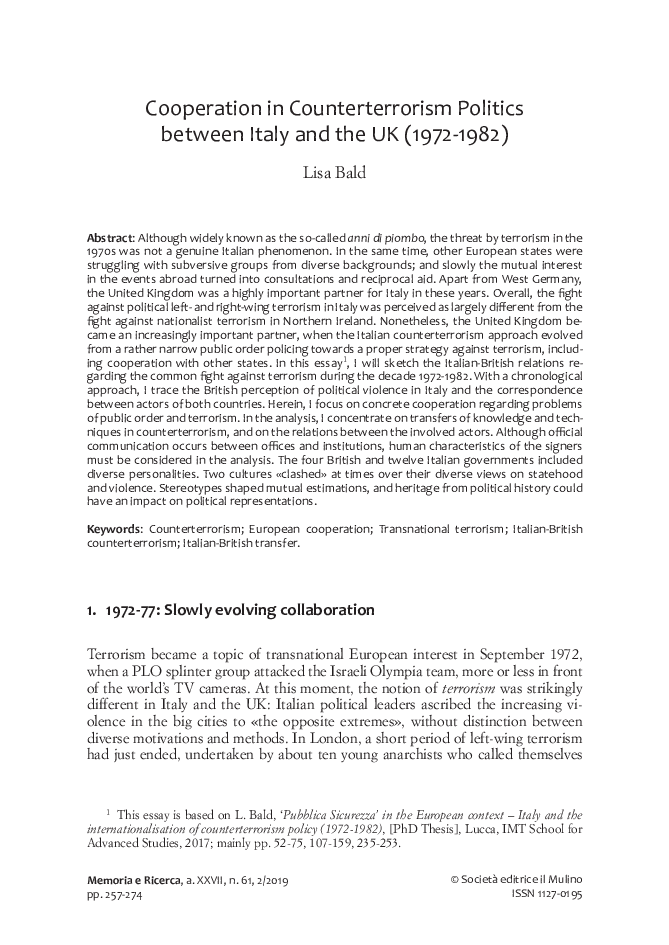