Between the years 1275 and 1280, the renowned Catalan physician and natural philosopher Arnaldus of Villanova wrote what can be considered the first treatise on the subject of love as a disease, Tractatus de amore heroico. Although the doctrine of erotic melancholy was already part and parcel of the culture of the Latin West, Arnaldus’ treatise frames the analysis of unrequited love in a scientific discourse that moves from the etiology of the disease to its signs and possible treatment and cures. Early modern medicine considered every form of love as a disruption of the humors of the body, as a shift in the material condition of the individual. In other words, love, whether happy or unrequited, was thought to determine a change in the body, both at the psychological and physiological levels, considered inseparable. The essay discusses the physiological mechanism that causes the image of a perceived person to move from the external senses to those located in the ventricles of the brain and why this phantasma (its technical term in the language of natural philosophy and medicine) can become and obsessive image imprinted in the lover’s mind thereby causing a breakdown of psychic and physical functions that can lead to severe disease and even death. Finally, the essay points out that as lovesickness became part of the European Universities’ medical cursus studiorum and the subject of medical dissertations, more and more emphasis was devoted to the pathological side of excessive erotic desire, linking it to madness and erotomania. 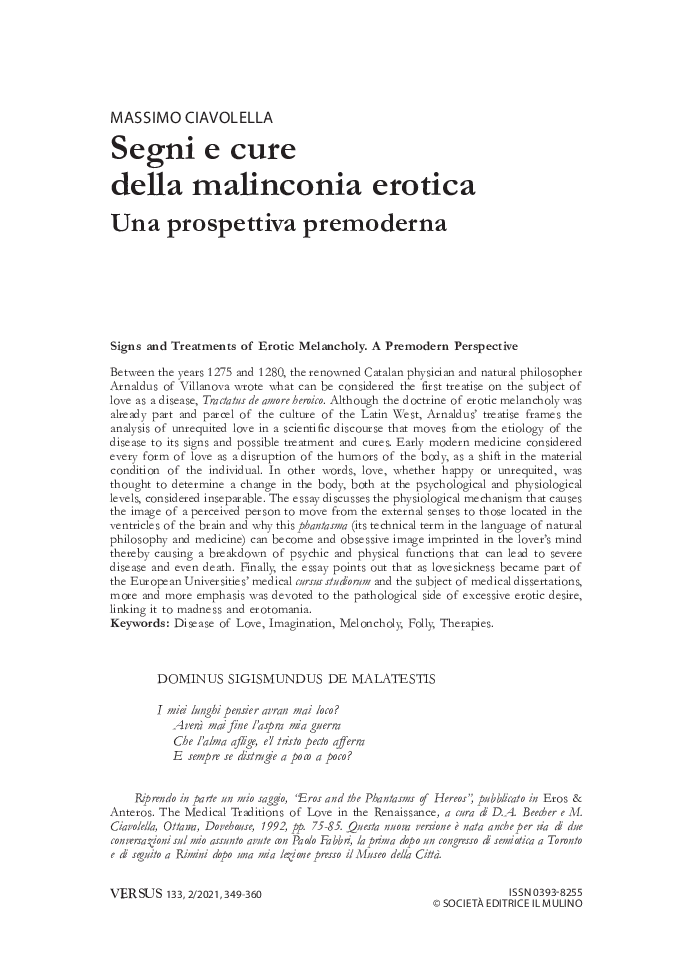