According to the «polluter pays» principle, a tourist tax should be used to reduce the negative externalities generated by tourism. In Italy, instead, local administrators use it primarily to levy fiscal revenues and know very little about tourists’ preferences in regard to this fiscal policy. The purpose of the paper is to describe the choices of the policy makers in setting the tourism tax and to compare them with the preferences of tourists, doing so with particular regard to the tax rates and the earmarking chosen. To achieve this aim, in May 2019 we performed a Contingent Valuation experiment by interviewing a sample of 884 Italian and international tourists staying in Trieste, the capital of Friuli Venezia Giulia, a region in the North-Eastern part of Italy. We asked the respondents to state the maximum that they would be willing to pay for the tax and how their willingness to pay would change according to how the revenue raised would be spent. We tested the four types of allocation set by the Italian law regulating the tax since 2011. On analyzing the tourists’ preferences, we found that the acceptability of the tax significantly increased when the respondent knew that the tourist tax was earmarked. Moreover, we found that the willingness to pay was strongly influenced by the tax earmark. If the revenue allocation was unknown, tourists’ willingness to pay the tax was very low; however, if the fiscal revenues were used for environmental protection or for the maintenance of the historical and architectural heritage, tourists’ willingness to pay significantly increased. The willingness to pay was also influenced by the tourists’ socio-demographic characteristics and by the journey type they chose. We discuss the policy implications of our empirical results, and propose an action framework in which to analyze tourists’ preferences and to enhance the effectiveness and efficiency of the tax planning process. To the best of our knowledge, no other paper has used a Contingent Valuation experiment to estimate the willingness of both international and domestic tourists to pay the Italian tourist taxes. In fact, although this paper builds on previous research carried out by the author, it substantially differs from the previous study with respect to the tourism type analyzed, the location where the data were collected, and the type of tourists interviewed. Moreover, differently from the previous research, it also compares the tourists’ preferences for the revenue allocation with the allocation actually chosen by the local administrators. 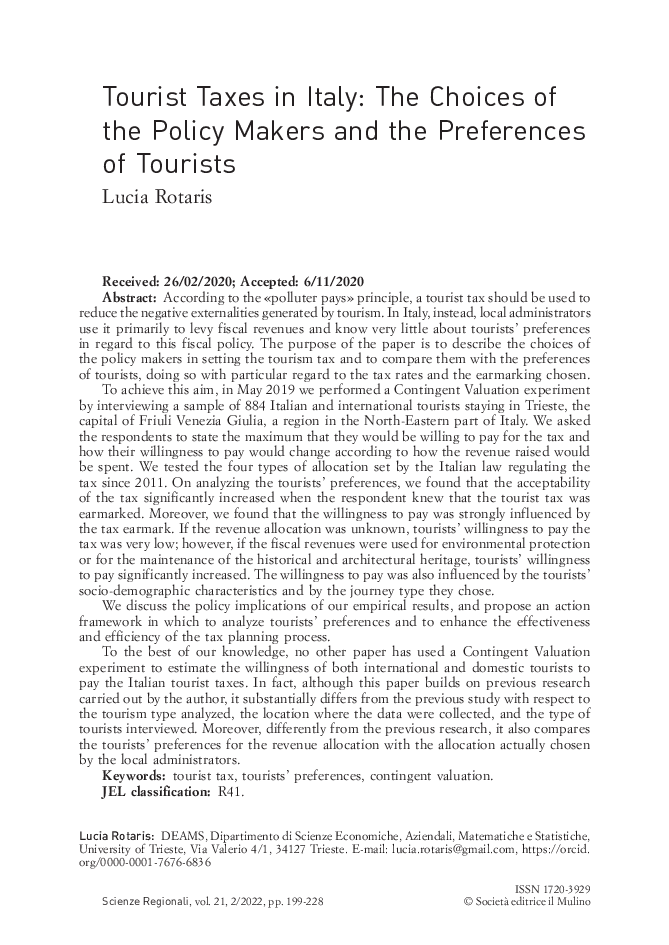