The research is framed in the tradition of social representations with particular reference to the media role and language. The object of investigation is to explore the political com- munication dedicated to the nine women ministers of the center-left government in 2006 (six) and center-right government in 2008 (four) and its possible correspondence with the representations self-reported by Italian women involved in politics. The aims are to highlight: 1) the existence of gender stereotypical traits considered masculine or feminine (eg. competitiveness vs. collaborativeness, independence vs. dependence, assertiveness vs. liabilities, etc.); 2) the reference to internal obstacles (no leadership, low self-esteem and self-efficacy, etc.) and 3) external (glass ceiling theory, labyrinth theory, no quotas for women, etc.) in the careers of women ministers; 4) the use of a more abstract or more concrete language to describe the characteristics/activities of women ministers according to the LCM (Semin e Fiedler, 1988); 5) the use of language which gives/takes away visibility to the female genre of ministers (eg., male generic or female specific). The material under consideration is composed of 175 articles published in five Italian newspapers (L'Unità, La Repubblica, Il Corriere della Sera, Il Tempo, Il Giornale). They were selected because they contained the names of women ministers in the titles. Each of the five points above has been transformed into content categories detected in the body of the article and reported in the form of lemmas (composed of the specific modality of the variable and of the Minister name) in a lexicographic files which contains also the words of the headlines. By the MOTS step of the statistical program SPAD-T were obtained frequencies of general vocabulary consisting of words relating to headlines and to content variables. The results allow to discuss the differences in language and content in general, with respect to the ten women ministers, and in comparison with the representations self-reported by Italian women politician 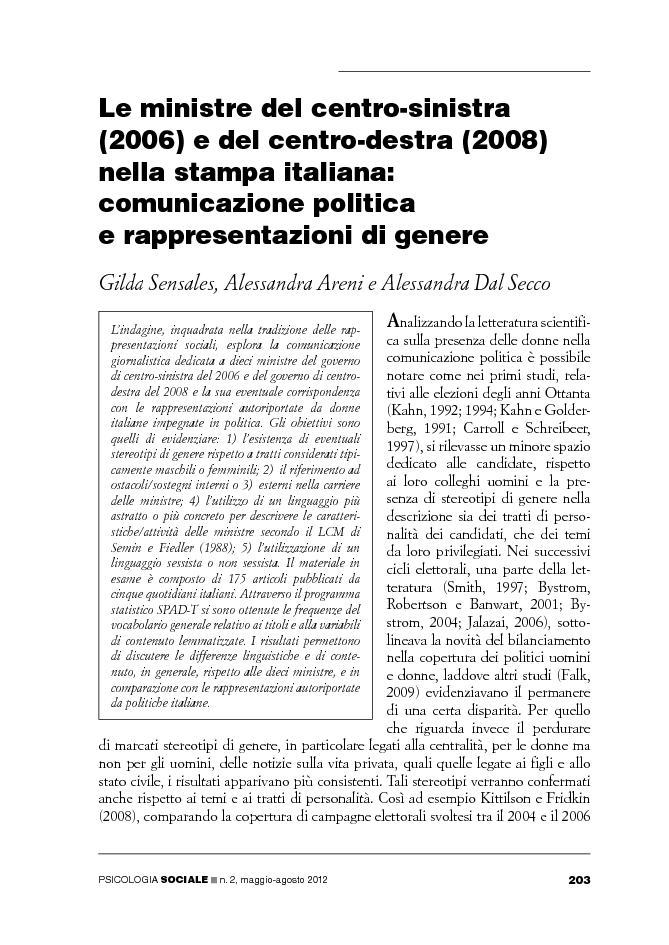