The paper analyses the liberalisation process of public and private services and the crucial improvements recently registered all over the EU. On one hand, this process pushed the elimination, or at least the reduction, of barriers which affect the access to, and the exercise of, service activities; on the other, it allowed the erosion of several monopolistic market structures, i.e. public utilities. Aiming at removing internal market barriers, the EC has recently formulated a draft directive on services (the so called Bolkestein directive), then replaced by a second proposal that focuses on private services and deals with some aspects of the economic public services. This EU scenario performes better at a global level, thus making wider the aim of the liberalisation process. The General Agreement on Trade in Services guarantees free trade and provides for removing the limitations which affect the access to, and the exercise of, all private services, economic public services, and furthermore those of general interest. At a national level, implementation of the EU legislation produced extensive liberalisation, leading not always to a remarkable development in terms of market competition. The paper offers an investigation of the main measures of liberalisation recently adopted by the Italian legislator in reforming services markets. The so called "Bersani Decree" aims at facilitating market access, removing restraints on services development, strengthening consumers' information, improving services quality and, finally, widening competition and regulatory authorities' powers of intervention and enforcement. Pros and cons of this Decree are strongly stressed and the measures are indicated to enhance its impact on the whole economic system. The author concludes that it would be desirable to adopt the procedure proposed in the above mentioned EU draft directive, even before its formal approval, in order to widen services liberalisation both at a national and a local level. 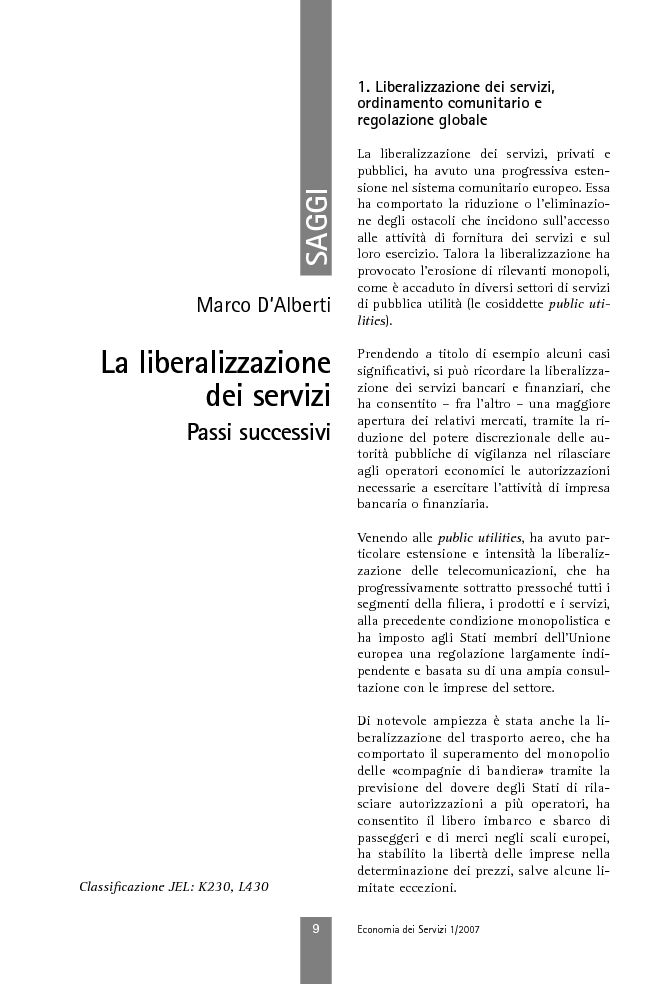