The International Nuclear Fuel Cycle Evaluation (INFCE) program was a US-sponsored initiative launched in October 1977. It gathered more than 60 countries among both nuclear suppliers and recipients and dealt with the risks involved in the spreading of nuclear technologies. Intended as a technical study rather than as a negotiation, it was presented as a unique opportunity to promote a multilateral dialogue on the control of nuclear proliferation that would escape the quagmires of other, more politicized, non-proliferation fora. Filling the gap of the existing scarce and mostly outdated scholarship, this essay stresses how INFCE originally represented an attempt to streamline the Western European suppliers’ ambitions with US non-proliferation policy. Based on US and Italian archival material, it will be focused on the interaction between the United States and Italy, in the contest of the INFCE program. The essay shows how Italy’s own aspiration to discuss the acquisition of the most advanced nuclear technologies through INFCE conflicted with the US’s early intention to sponsor the program as an instrument to enforce a universal denial of the spread of the fuel cycle. It also follows the successive shift of the Carter Administration to a less rigid, case-by-case approach. Dissatisfied with the uncertain results of its initial policy, the Administration reconsidered the INFCE dialogue as a chance to trade off looser restrictions of nuclear technology transfers to US allies with selective cooperation on the most dangerous proliferation cases. 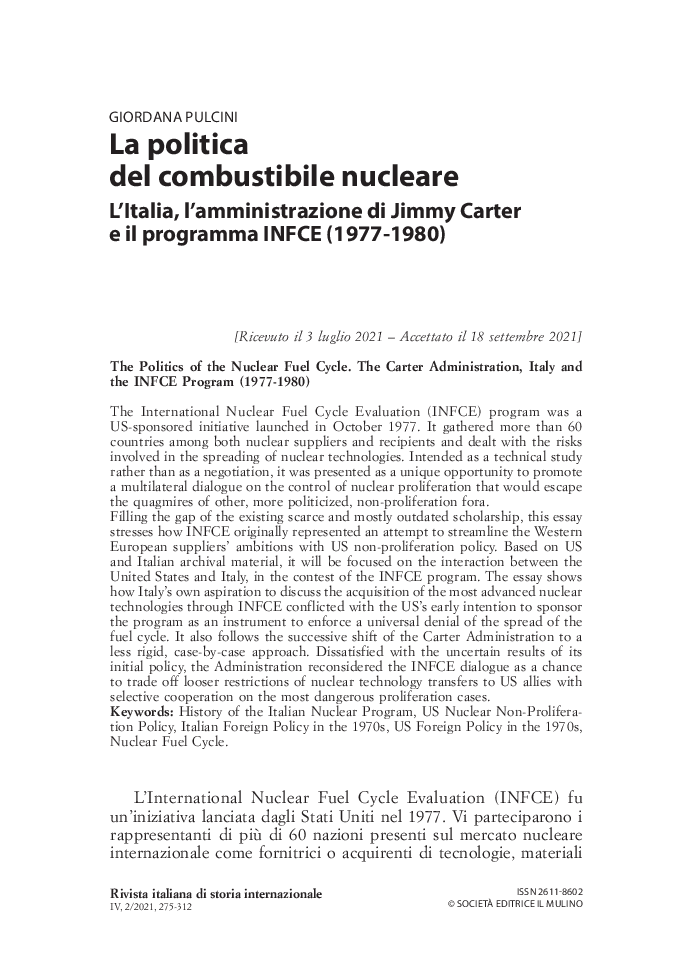