The article analyses some elements of the media's iconography of the new global terrorism, with a specific focus on the images and video documents of the Paris attacks in November 2015. I will consider the media spectacle that surrounded the Paris events as a way of giving a positive identity to the so-called Islamic terrorist, whose nature is otherwise unattainable and elusive. My study is articulated in three parts. I will begin by describing how the knowledge of terrorism promoted by the «terrorism industry» is based on a trivial tautology: terrorism is nothing but its production of victims, which is to say, its capacity to generate terror. I will then proceed to describe the forms of media staging of terrorism, starting from the other end of the tautological spectrum which defines the terrorist: the victim. More specifically, I will investigate the discursive frame in which the victims of terrorism have been encapsulated by the media, namely the forms of their commemoration that constructs them as victims of an act of terror. My analysis will thus address the online memorial devoted to the people killed in the Paris attacks by "Le Monde". Finally, I will show that if the victims of terrorism have to be commemorated, on the contrary terrorists are essentially «uncommemorable». Alongside the celebration of the victim is the corresponding reduction of the terrorist to his/her basest nature, beyond the political order. The terrorist, therefore, only exists in the act of eliminating victims and in his/her own disappearance either as a corpse, or even more radically, as a total absence without any corporeal vestige. 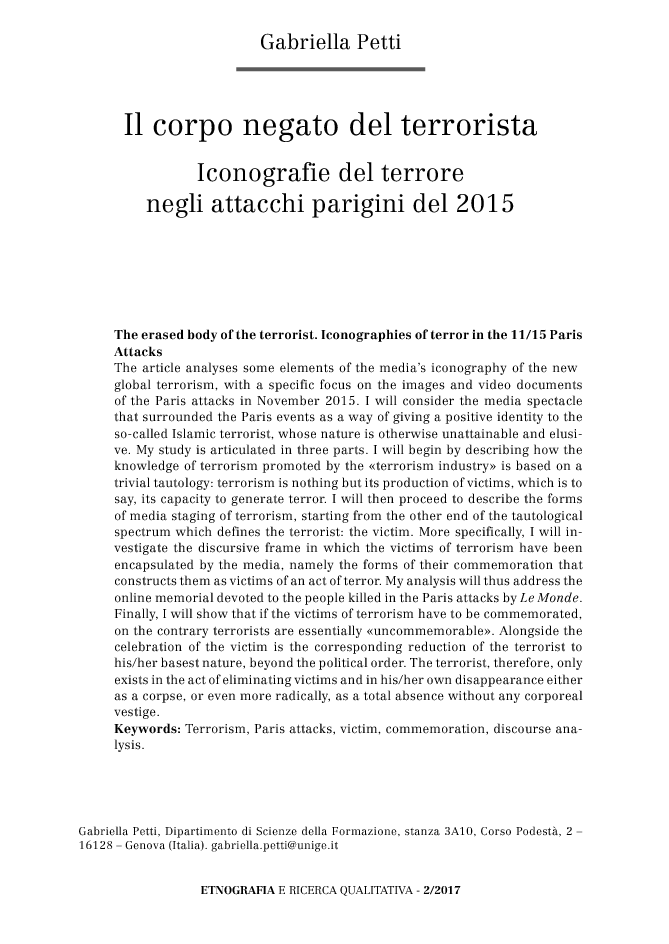