The Ivorian migrants I met during multi-sited ethnographic fieldwork in the region of Paris, as well as in Naples and Parma, reinvent, redefine and update practices drawn from the culture of their home society, thus becoming the authors and actors of a connection and dialogue between two seemingly distant universes of reference. The aim of this paper is to compare certain cultural forms specific to Ivorian societies with practices which are at the heart of the contemporary, intercontinental, Ivorian migration experience. Two comparison units will be processed. In the first, which I call Â«metaphoricalÂ», I examine the significance of certain contemporary migration factors with regard to a Â«traditionalÂ» initiation rite: the Â«PoroÂ», which allows this migration to be defined as a Â«contemporary ritualÂ». In the second, which I name Â«concreteÂ», I describe a type of informal intracommunity hospitality: the Â«tutoratÂ». This practice, which has become institutionalised in West Africa and particularly in Ivory Coast in the context of rural and urban migration, defines all the social relations that develop between a hosted foreigner and his/her native host. The âtutoratâ has been transposed by Ivorian migrants into European destination cities; it represents one of the modes of adaptation adopted by migrants to deal with contexts in which the reception policy is insufficient for their needs. 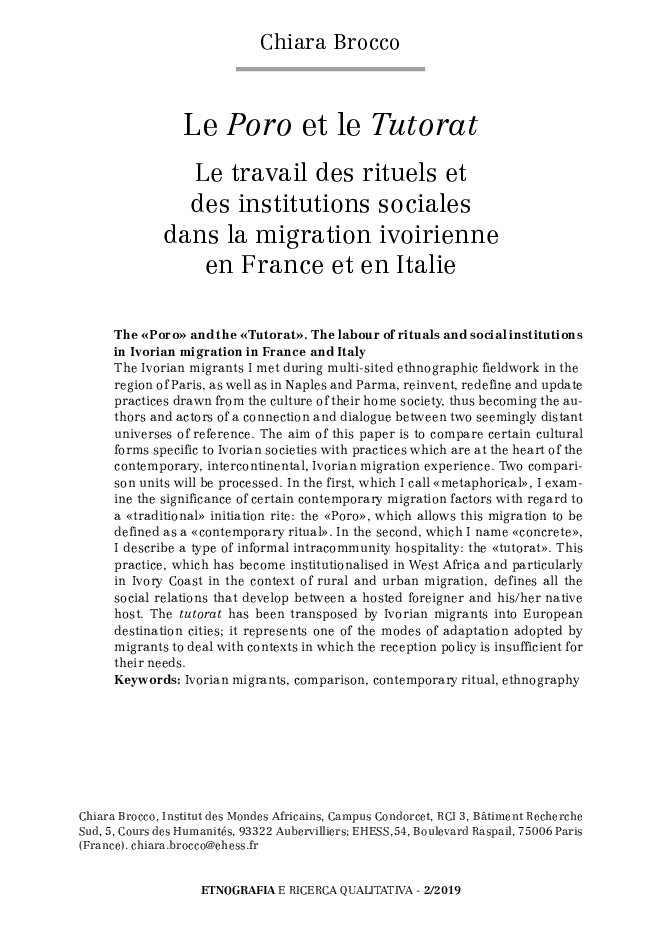